By Joanna L. Krotz August 21, 2012
This story originally appeared on Business on Main 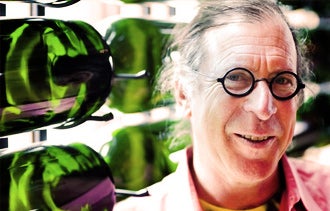 Start with the grape-growing methods of medieval French monks. Add in a spiritual science called “biodynamics,” which was formulated in the 1920s by German philosopher Rudolf Steiner and spawned the international organic movement. Mix together with artisanal techniques that promote heirloom fruits and vegetables, protect water tables and maintain nutrients in soil -- and you have the wine that has become Randall Grahm’s life’s work.

After three decades in the wine business, at age 59, Grahm has committed to producing vin de terroir, or "wine of place” (from the French terre for “earth”) in the New World. This Old World model cultivates grapes that so intensely express the alchemy of a specific place -- climate, geology, soil, water, biodiversity, biochemical composition, ecosystem -- the wines produced from them offer consummate originality and quality that can’t be reproduced anywhere else.

“The holy grail is to make a completely differentiated product,” says Grahm. “In this new weird economy, you have to either do something more efficient than anyone else, [more] cost-effective, or you must produce an utterly distinctive product. From an agronomic standpoint, that’s wine that expresses a sense of place. It’s unique, costly, tedious and risky. But, ultimately, if you achieve it, you’ll have something infinitely precious.”

Randall Grahm is on a vision quest that could seriously eat his lunch -- or make viniculture history. “Randall is one of the most interesting people in the business,” says Andrew Waterhouse, professor of enology at the world-famous viticulture school at University of California, Davis.

Shaking up the wine industry

A Los Angeles native and University of California, Santa Cruz, alumnus, Grahm wandered into the biz in 1975 via a clerk’s job at a Beverly Hills wine shop, working up to salesman and manager. “I got an intense education,” he says, noting the opportunities it provided him to taste great French wines.

Next came a plant sciences degree in 1979 from the University of California, Davis, where, he says, he became obsessed with pinot noir.

By 1981, with some family help, Grahm had purchased property near the town of Bonny Doon in the Santa Cruz Mountains, south of the Bay Area, establishing Bonny Doon Estate Vineyard (now Bonny Doon Vineyard).

Under the Bonny Doon label, Grahm pioneered a series of innovations, such as development of French Rhone and riesling grapes in California. At its height around 2006, Bonny Doon sold about 450,000 cases, more than 5 million bottles. Grahm also earned a reputation as a smart winemaker, cheeky showman, poet-philosopher and pathological punster (he’s a self-described “vitizen of the world”).

“Everyone in the industry knows of Randall Grahm being something of a renaissance man — progressive and innovative,” says Allison Jordan, executive director of the California Sustainable Winegrowing Alliance.

Where Grahm has led, the industry often follows. So when he began dramatically unwinding his business six years ago and selling off his property and moneymaking labels to focus on high-end wines, few would outright dismiss the left turn.

Rethinking the path to success

Grahm’s decision to “put my money where my mouth is” arose from life-altering events. In 2003, at age 50, he had a daughter — Amélie, now 9 —  with his partner Chinshu Huang, an alternative energy business developer. A year or so later, he suffered a near-fatal bout of osteomyelitis, a bone infection, which required months of drugs, healing and wearing a heavy neck and head brace. Both experiences made Grahm take stock.

“Life is short,” he says today. “If I were to die, I thought people would say, ‘What a great marketer he was.’ I didn’t want to be remembered for clever marketing. If producing terroir is a supremely difficult thing to achieve in the New World, it should not mean I shouldn’t try. It was years since I discovered I loved wines that express a sense of place. But I wasn’t doing it.”

Long interested in sustainable practices, Grahm had begun experimenting in 2002 with biodynamic principles, which emphasize biodiversity and a view of nature that’s holistic and interconnected. It also prescribes what seem like some truly woo-woo demands (for instance, burying a lactating cow’s horn filled with manure in the soil for its fertilizing abilities).

“The movement is steadily growing in the U.S., though it’s more popular in Europe,” says Jim Fullmer, executive director of the Demeter Association, a biodynamics certifying organization. Adherents swear that once you taste biodynamic wine or food, you’ll never go back.

In 2007, Grahm’s Ca’ del Solo wine won Demeter certification — not an easy task. So he’s moved toward making wines closer to his beliefs. But being biodynamic doesn’t necessarily lead to a wine expressing its terroir.

After six years of searching for the perfect property, in 2010 Grahm purchased 280 acres in San Juan Bautista, in San Benito County, to establish his boutique vineyard. “It has unique geology, incredible energetic presence, extraordinary exposures and interesting soil,” he says. The site also is sacred to the Native American Mutsun tribe. “I saw it in a dream before I visited it,” Grahm adds.

He named the estate Popelouchum, Mutsun for both “paradise” and “village,” and now has about 80 acres under cultivation. He has high hopes of growing the special grapes that will produce wines representing this absolutely original terroir in six or so years.

Meantime, he’s producing other wines with grapes he purchases, running Le Cigare Volant, the Bonny Doon restaurant and tasting room named for his signature wine, and appearing at foodie events around the country to publicize his products and book, “Been Doon So Long: A Randall Grahm Vinthology.”

Randall Grahm isn’t the type to sit around waiting for his grapes to grow. But he’s nonetheless laser-focused on the future: “My gamble is whether I can ultimately produce wine with qualities so unique that no one will be able to emulate it,” he says.