By Nadia Goodman August 21, 2012
Opinions expressed by Entrepreneur contributors are their own. 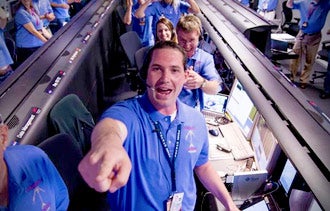 With the success of the Mars Curiosity rover, NASA is shooting for the stars, with the goal of setting foot on Mars by the mid-2030s. To accomplish this feat, the astronauts will face long hours, high stakes, close quarters, and little leeway for inefficiency or error--many of the same challenges that startups and small businesses encounter.

"We’ll be sending a team that has to rely on themselves to solve their problems because of the communication lag," explains Eduardo Salas, a psychologist at the University of Central Florida who has been called in as a team training consultant for the mission to Mars. "They need the skills to self-correct."

Much like a traditional business team, the crew will undergo NASA's comprehensive team training program. "We offer classes on cross-cultural training, conflict management, self care and self-management, and we review teamwork lessons from past expeditions," says Walter Sikes, an aerospace psychologist for the Behavioral Health and Performance Element at NASA.

Related: How to Give Employees Independence Without Losing Control

To help your team become more efficient and effective, focus on developing these four skills that Mars-bound astronauts will be expected to master. Here’s how:

1. Teach people to follow before they lead. "Being a follower is an important lesson in being a leader," Sikes says. Good followers know how to listen, speak up when they’re confused, adapt to the leaders’ style and give constructive feedback without seeming confrontational. They also know when to ask questions and when to execute orders. In a crisis, that can be the difference between recovery and failure.

To build those skills, NASA sends crews on outdoor expeditions--missions where their titles don’t apply. "We rotate the leadership every day," Sikes says. "They learn how to communicate and how to divvy up tasks."

2. Don't let conflicts get in the way of the goal. When conflicts arise, help your team resolve them with the broader mission in mind. Effective team members clearly articulate their needs and boundaries to avoid future arguments. NASA’s astronauts are also taught to recognize differences in cultures and individuals so they know where misunderstandings might occur. "It really comes down to learning to communicate clearly and concisely," Sikes says.

"We know there’s going to be conflict," Sikes says. "But (the astronauts) know that the mission and safety are critical and those come first."

"When you know your role and others’, you can be ahead of the curve under stress," Salas says. "You can anticipate each others’ needs."

4. Debrief after mistakes. To ensure that a team stays on track, Salas emphasizes the importance of "guided team self-correction." The team should review what went wrong and how to fix it after every mistake. “It could take three minutes or three hours," Salas says. What matters is that you make it a habit.

When mistakes pop up in your company, discuss what happened with the individual or the team, and suggest ways to improve the process. Emphasize that the conversation isn't about expressing anger, frustration or blame, it's about figuring out how to make improvements in the future. "(The conversation) needs to be depersonalized in order to be productive," Salas says. "You’re not talking about people. You’re talking about tasks."