The Art of Stretching the Truth 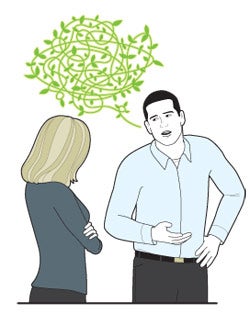 Along with any professional conversation comes a certain amount of bullshit. It is so fundamental to the business world that to condemn it would be to shake the very foundations of enterprise. (Note: The preceding sentence is an example of hyperbolic yet ultimately harmless bullshit.)

Every venture starts out with one person saying, "I have an idea!" and the other person wondering, Yes, but is it bullshit? But that's a good thing. Because first there is bullshit, then there is skepticism and then there is a refined idea full of a lot less bullshit. Bullshit is good for the work we do. Ultimately, it keeps us honest. So, we must not condemn it. We must understand it--embrace it even.

A Garden of Meaningless Responses
"Our research team is still looking into it."
"We're cautiously optimistic."
"We're taking a wait-and-see approach."
"At the end of the day we both want the same thing."
"Best in class."
"We're reaching out ..."
"We're touching base …"
"We're going forward …"
"We're reaching out and touching base and going forward."
"We're full-service. We can do whatever you need."
"In a word: learnings."

Or at least be able to detect it.

How to Spot It
The psychologists we spoke with didn't really want to talk about it. Turns out, psychologists bristle at the notion that bullshitting and lying are not the same. To them, it's all deception. The best we could get out of Dr. Gerald Goodman, emeritus professor of clinical psychology and psycholinguistics at the University of California, Los Angeles, is: "When someone is distressed by lying, they will show signs--they'll stumble, be disfluent, won't talk smoothly."

But what if someone is really, really good at it? How do you spot it then?

Venture capitalists are more forthcoming on the subject. When we spoke with Jor Law, a Los Angeles-based seed and angel investor and corporate attorney, he regaled us with a long list of examples of types of bullshitting common in entrepreneur meetings. Among them:

Partnering. "There's being a Microsoft partner, meaning you're certified and you work with Microsoft products, and then there's Microsoft's business team reaching out and saying they want to partner with you. Those are two very different things."

Future partnering. "They'll say that their advisor is going to come on full-time once they're funded. The truly great entrepreneurs are able to get people to work for them for free."

Egotism. "They'll say, 'No one is doing what we're doing,' or worse, 'No one can do what we're doing.' That suggests they're delusional or egotistical or unable to deal with reality. The more legitimate entrepreneur will say, 'Look, we figured it out, it's not rocket science.'"

What all these examples have in common is extremism. If you're going to bullshit, you need to do it subtly. If you bullshit about vague partnerships and absurd projections, then you're showing your hand. Bullshit is ineffective when it comes off as either screaming or backing away.

Pivoting away from questions. Politicians, who are more masterful at bullshitting than anyone else, do this all the time. They answer the question they wish had been asked.

Looking to a colleague before answering a question. It's a cry for help.

Any kind of scratching. Of the face, of the arm … of someone else's face or arm.

Looking up and to the right. Or to the left. Or down. Or up. (There's some disagreement in the neuropsychological community about what looking around means. Does it connote lying, or does it connote imagination? In our experience, it connotes bullshit.)

Says Law: "I expect to see BS in the pitch. And if it's not in the pitch, I might wonder if this guy is playing the game the right way. You want entrepreneurs to BS a little bit. Because if they can't BS to you, they can't BS to other people when they have to and take that company down the line."

Someone who has frequently been on the other side of the table agrees. "Bullshitting can be a positive thing," says John Grange, co-founder of Omaha, Neb.-based Layeredi, a platform for managing mobile-marketing campaigns. "When you're in a sales meeting and your product isn't quite there, but you know it's going to be there, it's OK to grandstand a little."

The best part about good, honest bullshit is that it holds you more accountable than you were when you started bullshitting. You're staking your word and your talent on what it is you're saying. You're upping your own ante. Which brings up the most underrated aspect of bullshitting: its redemptive power. Which, admittedly, sounds like a bunch of bullshit. (But bear with me.)

When you bullshit, you're searching for the truth without any clue where to find it. But you keep searching. Because maybe the bullshit itself will lead to the truth. Maybe whatever combination of words you're stringing together will magically amount to something. Against tough odds, against deep skepticism, against people looking at you like you're clearly insane, against the sound of your own voice talking about ideas you do not fully grasp, you're still not giving up. Because you still have faith in yourself and your audience. You keep talking.

You keep trying. It's almost noble. 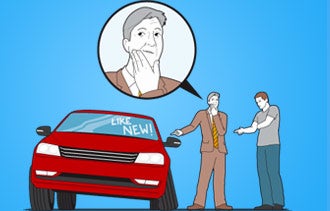 When bullshitting someone, do not rub the side of your face. This is known as a "tell."

Do not look up and to the right. This is also known as a "tell."

Do not refer to the notes you have scribbled on your palm. This is known as a "tell."

Related: Never point out that you and the other person here are both adults.

Especially if you're bullshitting a child.

Do not use the term "the old soft shoe" unless you're referring to a traditional form of tap dancing.

When pivoting away from a potential minefield, do not actually pivot.

When in doubt, use acronyms. Really use them. Have acronyms interact with other acronyms. For example: "What we're gonna do is, we're gonna take the ICT and just BG3 it. We're gonna BG3 it until we've reached full SNQ. And you know where that'll take us. That's right: LMDX. Possibly LMDX-P. LMDX-P, people!"

Related: Do not use acronyms that actually stand for something.

Unfortunate truth: All acronyms now stand for something.

If they don't seem to be buying it, just repeat what you've said, but this time look everyone in the eyes, point at them, squint and shake your head. When desperate, the master bullshitter must employ a potent cocktail of enthusiasm and disgust … and a shitload of acronyms.