How to Build a Better Brainstorming Session 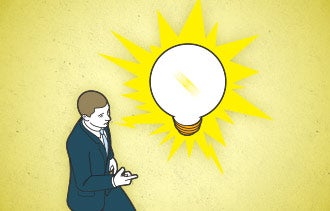 Q: Does collaboration help get ideas going, or does it quash them?

A: Both--sort of. Ideas tend to get a better boost when you apply a thought-process combo platter: Start off the thinking session solo, then bring a group together for brainstorming, then go your own ways and let the ideas marinate.

When the problem is a simple, finite one, like thinking up names for a new product, individual work is most effective. "Solitary people generate longer and better lists, but most of our problems are more complex and involve coming up with whole systems," says Dr. R. Keith Sawyer, professor of psychology, education and business at the University of Washington and author of Group Genius: The Creative Power of Collaboration.

For the best results, ask people to do advance work on their own and bring those ideas to a brainstorming session. "You benefit from a kind of synergy where one person might have a good idea about one component but be clueless about the rest of the system," Sawyer says, "and another person can be inspired by that and have an idea about how those components will work together." Just beware of "topic fixation," the phenomenon of a group getting stuck on one idea at the cost of generating others.

An effective brainstorming session should include more than two people but no more than 10, and the makeup should reflect what researchers call "cognitive diversity"--that is, not a bunch of accountants. "What's really important," Sawyer says, "is that the conceptual material in your brain is different from the next person's."

Plan a follow-up meeting a week after the session to ask if anyone has come up with ways to move the idea forward. "In creativity research we call that 'incubation,'" Sawyer says. "Your self-conscious mind starts working on the information you've gathered and bumping ideas together, and that's when a surprising 'aha' moment happens."

Some of the best ideas come from casual run-ins -- what Sawyer calls "hallway encounters"--so CEOs should strive to create a company culture in which unscripted time is encouraged and collaboration is valued. After a meeting at 3M, Art Fry was chatting with a scientist about a new adhesive he was looking to take to market. One Sunday shortly after, while singing in his church choir, Fry came up with the idea for Post-it Notes -- an idea that has definitely stuck around.