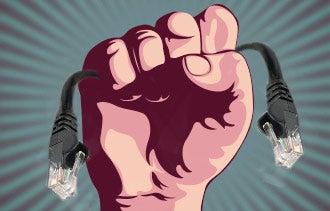 The same group of tech entrepreneurs that created the "Declaration of Internet Freedom" petition earlier this summer are taking their message about an open and free internet on the road to get the attention of U.S. presidential candidates Barack Obama and Mitt Romney.

Called Internet 2012, the bus tour will kick off next month during the presidential and vice presidential debates. In a bus painted half red and half blue, members of the group will start off in Denver and wrap up in Danville, Ky. -- including an event at the Kauffman Foundation in Kansas City, Mo.

"The Open Internet is about the freedom for Americans to help themselves, and it's an enormous engine for economic growth," group members Alexis Ohanian, co-founder of social news site reddit, and reddit general manager Erik Martin wrote on Internet 2012's fundraising page.

Ohanian is just one of many entrepreneurs, businesses and other organizations that are participating in the Declaration of Internet Freedom and Internet 2012. The aim of both is to draw attention to and collectively stand against a number of federal anti-piracy bills that they argue would threaten free sharing of information online. Some of these bills include the Stop Online Piracy Act (SOPA), the PROTECT IP Act (PIPA), the Anti-Counterfeiting Trade Agreement (ACTA) and the Cyber Intelligence Sharing and Protection Act (CISPA).

SOPA and PIPA, which aimed to punish "rogue" websites that publish or sell pirated content, were sidelined in Congress this year after several online and in-person protests. ACTA is an agreement that aims to force internet-service providers worldwide to act as "internet police." CISPA is a proposed law that would call for the sharing of certain online information between tech companies and the U.S. government.

"As the Internet becomes more critical to our democracy and economy, concerns about the freedom to connect online are ever more important to ordinary Americans," David Segal, executive director of activist organization Demand Progress, said in an announcement. Demand Progress and several organizations have sent a letter urging the Democratic and Republican parties to support "Internet freedom."

"It behooves both parties to demonstrate their support for that cause -- in their platforms, and in their legislative undertakings," he said.

How much of a focus on internet freedom should the U.S. Presidential candidates have this election season? Let us know in the comments section below.