By Jonathan Blum and Alex Dalenberg August 31, 2012
Opinions expressed by Entrepreneur contributors are their own. 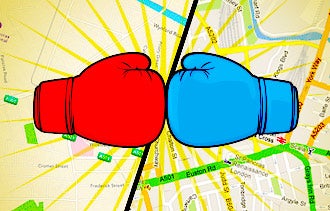 In a move meant to compete directly with Google Maps, Apple is expected to come out with its own mobile maps application this fall. This means big changes are in store for how customers will find and learn about your business.

Tech giants are turning maps into location-based experience services. Apple is already bragging that its new maps app will be "the most beautiful, powerful mapping service ever." It will feature what the company claims will be a new approach to how maps are rendered, including turn-by-turn directions and "Flyover" functions that will blend Google Earth-like capabilities, including 3-D images, with maps.

The expectation is that these tools will become extensions of local search options that smaller firms rely on to be found. Here's our road map for what to expect from the new mobile maps revolution:

1. Expect new ways to market using your location.
Apple is already planning a Quick Route function as part of its local search function that can lead customers to stores. Not to be outdone, Google is offering packages for automated business listings, and promotional services as part of its Places for Business product as well as turn-by-turn navigation for bicycle commuters.

And where Google and Apple go, so goes Microsoft. The company announced its most aggressive upgrade to its map imagery in July. This will be offered as part of its MapPoint 2013 software product that ties in not only geographic data to maps, but population information and research content aimed at showing businesses location-based opportunities and marketing trends.

2. Maps need to become part of your search strategy.
Smart businesses will be proactive on how mobile users find and interact with them on maps. Among the new features that businesses can expect to exploit are the expanded role for social content and the ability to offer location-based deals.

Apple's Maps application is stressing local reviews and search content from Yelp, which announced in June that it will be directly built into Apple maps. Google recently upgraded its Google+ integration for maps with Google Map Maker, which builds local content added by users into its maps. And earlier this summer, Microsoft announced new integrations with Nokia as part of its interactive features on Windows phones.

The time is now to claim your business page on sites such as Google Places and Yelp, and make sure it has the most up-to-date information. Update Google's Map Maker with detailed information about your business. Label your business on the map, test and confirm the directions given.

Those third parties offer features that Google and Apple do not, such as off-line functionality. And both can be easier to partner with to develop targeted programs for specific business challenges.

When is it Right to Fire Your Marketing Agency?