College Students Who Pivoted Into Entrepreneurship

By Brian Patrick Eha September 17, 2012
Opinions expressed by Entrepreneur contributors are their own.

To succeed as an entrepreneur, you occasionally have to be willing to give up something good for something great. Austin Hackett was halfway through a medical degree at Columbia University in New York when he decided to devote himself fulltime to his startup discussion platform, CrowdHall.

His mother was supportive, but his father had doubts. Wouldn’t it be better, his father asked, to complete the medical degree before risking his future? Although Hackett was interested in helping people, he knew then that the physician’s life wasn’t for him.

For Hackett and many more young people like him, it’s painful to discover that the decisions made as a 17- or 18-year-old college student don’t always continue to ring true at 21 or even 27 years old. But what do you do? Stick it out in a career that’s not your dream or pursue your real passions instead?

Related: Thinking of Majoring in Entrepreneurship? Read This First

That’s a question serial entrepreneur and Brown University entrepreneurship professor Danny Warshay often helps his current students and new grads grapple with. Students have considerably more options than they realize, he says. But too often they narrow their choices before performing a true self-assessment and figuring out where their passions lie. “Unfortunately, many of them end up unhappy and come back to me for guidance,” adds Warshay.

To prevent this fate, Hackett turned to more creative pursuits. He is creating a communications platform that he claims will be especially useful to celebrities and politicians.

On CrowdHall, users can create individual profile pages, called “halls,” and followers can post questions to them. The entire audience has the ability to vote on which questions they would most like answered. You can check your hall on a regular basis to answer the top questions, and the answers will be sent out to those who voted and archived in the hall for everyone to read.

Hackett and his co-founder Jordan Menzel have already made some progress. After selling an early CrowdHall prototype to the U.S. Agency for International Development, the founders are planning a soft launch of the full platform this month. The site will also host the Columbia University Earth Institute’s State of the Planet conference in October.

Related: 5 Ways to Land Press for Your Startup From Your Dorm Room

Like many entrepreneurs who’ve transitioned into business from alternative career paths, Hackett says his previous experience has been an asset. Being a doctor, he says, is about “trying to understand patients and letting them feel like they have a voice that matters. And that’s exactly the thing we’re trying to do with CrowdHall. Every person has a voice that matters and they have an opportunity to be heard in the wider public space.” 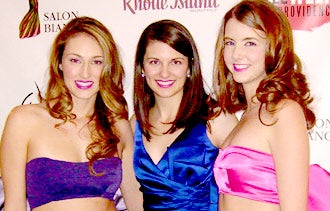 Julie Sygiel (in Blue) turned her chemical engineering background into a business.

Perhaps the most important catalyst to pivoting away from a college major or first job is finding a need that you connect with. Just ask Julie Sygiel.

In 2008, Sygiel was a junior at Brown University studying chemical engineering. But after taking Warshay’s entrepreneurship course, she realized her true vocation. During the class, she and two classmates were tasked with creating a business idea that solved an everyday problem. The problem Sygiel’s group picked: accidents that befall women during menstruation. And the idea, which would eventually become Underbrella, was a line of high-tech undergarments in breathable fabric with a thin, leak-resistant layer.

Upon graduation, Sygiel started up the company, which the now 24-year-old says will hold its first preview sale on its website in October. Soon after, the line will be available in at least 16 boutiques across the country as well as on ActivewearUSA.

Although Sygiel once considered going into food science or the cosmetics industry, she now says she doesn’t think she’ll ever work as an engineer.

“You’re going to be way more successful doing something that you love,” she says. “Sure, there are going to be hard days. But don’t settle if you’re not really happy doing what you majored in.”

How did you turn your college degree or first career into something completely different?Let us know in the comments section below.