Where They Stand on Taxes: Obama vs. Romney 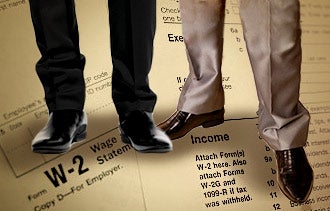 Editor's Note: This 10-part series looks at issues critical to entrepreneurs this election season. Read the first installment on the economy.

As the Presidential election becomes a referendum on the size that government should be, how much tax the government should levy is a critical issue for both candidates. The size and scope of tax reform is a way for both President Barack Obama and Republican candidate Mitt Romney to hammer home their philosophies of "big government" and "small government," respectively.

For small-business owners, how much tax they pay directly impacts their bottom line. One in five say tax policy is the political issue that will have the biggest impact on their business, nearly tied with healthcare, according to a survey of nearly 2,000 small businesses conducted by online small-business community Manta in early August. Government regulation came in third.

Both political parties have been working to woo the small-business constituent with their tax-reform plans. And, both have succeeded to win favor with some small-business owners, groups and advocacy organizations, while offending others.

Most recently, Obama has used the GOP's tax-cut agenda as a punchline on the campaign trail. Republicans continue to offer "the same prescription they've had for the last 30 years," the President said at the Democratic National Convention in Charlotte, N.C. "Feel a cold coming on? Take two tax cuts, roll back some regulations, and call us in the morning."

Romney, for his part, has countered that government spending, not a lack of tax revenue, is the real problem. "It's that we're spending too much money and the economy is not growing as it could and should," he said Sunday on NBC's Meet the Press.

Meanwhile, both candidates come together over warnings against the "fiscal cliff" – that is, the series of tax changes that go into effect at the end of the year if Congress does not act. With Bush-era tax cuts set to expire, tax rates will go up by 3 percent for most individuals and 4.6 percent for those making more than $388,350.

Here’s a rundown of where the candidates stand on the biggest tax-policy issues that affect entrepreneurs and small-business owners:

Former Massachusetts Gov. Romney
In that iconic battleground over the Bush-era tax breaks, Romney has been aggressively supporting an extension of the cuts for all.

The Romney campaign also says it would eliminate the Alternative Minimum Tax, a parallel tax structure that disallows deductions and is designed to prevent wealthy individuals from pushing their tax bills down too low. LLCs, partnerships and S corporations are subject to the AMT since their incomes trickle down to the owners' personal tax returns. Romney has also pledged to repeal the corporate AMT, established with the same purpose for corporations.

As part of Romney’s small-government pitch to the American public, he says he will lower the corporate tax rate to 25 percent, ten percentage points below the 35 percent where it currently sits.

President Obama
The Obama Administration has been pushing to extend the Bush-era tax cuts for every family that makes less than $250,000 -- and on the first $250,000 for families that make more -- claiming that tax break would affect 98 percent of Americans and 97 percent of small-business owners.

Obama frequently talks about the 18 different tax breaks that he has implemented for small businesses already, including tax credits for hiring, deductions for health-insurance costs, and write-offs on investments in equipment like new machines and computers.

What tax provision is most important to entrepreneurs? Leave a comment below and let us know.