Obama vs. Romney on Government Contracting and Federal Spending

By Diana Ransom September 18, 2012
Opinions expressed by Entrepreneur contributors are their own. 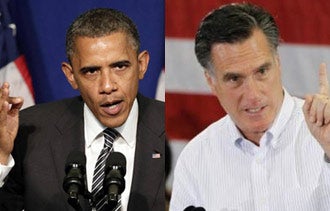 Editor's Note: This 10-part series looks at issues critical to entrepreneurs this election season. Read installments on the economy, taxes, healthcare and capital.

Landing the U.S. government as a client is often a blessing for small-business owners. But it can quickly become a burden once a government contract dries up, which is a growing possibility as calls for austerity have escalated this election season.

For small businesses, the government can serve as an ideal customer -- one that tends to drop billions on everything from office equipment and notepads to bullet-proof vests and consulting services. But this big spender may soon begin to pull back.

A year ago, Congress reached a deficit-reduction deal that imposed across-the-board cuts, or what's known on Capitol Hill as sequestration. The move was meant to force Congress to reduce the nation's ever-widening deficit -- or else trigger $1.2 trillion in automatic cuts to defense and nondefense programs. With a January deadline looming, some business owners like Todd Flemming fear the deficit-reducing measure will backfire -- costing the U.S. jobs and harming small businesses.

As the president and CEO of Infrasafe, a small federal contractor in Orlando, Fla., Flemming depends on clients like the Department of Defense and the General Services Administration for 80 percent of his security company's sales. So it's little wonder that he is nervous.

"A lot of the funding we get comes from discretionary spending that federal agencies do at the end of the year," says Flemming. "We're seeing now they don't know how much money they'll have or what contracts they'll have going forward… It creates a lot of uncertainty."

Besides the effect of across-the-board cuts on small businesses, contractors often complain that serving as a prime contractor or subcontractor is riddled with obstacles. The paperwork can be exorbitant and the competition fierce.

Barack Obama
Barack Obama has made no secret about supporting a policy of investing tax dollars in U.S. businesses. Under his watch, companies like the now-bankrupt solar-panel maker Solyndra have received $535 million in loan guarantees, but he has also supported investments in everything from electric-drivetrain technologies to fast-charging batteries. At the end of 2011, Obama also signed into law a defense bill that included a provision to both extend and expand two key small-business research programs. The Small Business Innovation Research (SBIR) program and the Small Business Technology Transfer (STTR) program require certain federal agencies to devote a percentage of their research budgets to U.S. companies aiming to commercialize the latest technologies. Last year, both programs divvied out $1.36 billion in funding to small businesses. The year before, they received roughly $2.4 billion.

Then, in November, the President -- per his "We Can't Wait" initiative -- called for federal agencies that have laboratories like the Department of Energy and the National Institutes of Health to halve the time it takes small businesses to receive research and development grants. Also last year and again in July, Obama called for trimming the time it takes small federal contractors to get paid, to 15 days from 30.

Mitt Romney
Once upon a time, the government's role in supporting business growth was widely believed to be a platform that both parties could get behind. The internet, among other inventions, is brought to you courtesy of government scientists, after all. In his book No Apology: The Case for American Greatness, (St. Martin's Press, 2010) Romney even called the practice essential to the nation's economic well-being, and highlighted the government's involvement in creating everything from lasers to MP3 players to MRI scanners. In his book, he also advocated boosting the government's investment in research and development.

But today, he's spent more time doling out critiques of federal investments and trumpeting a "We Built It" mantra. Embattled green-energy company Solyndra, for instance, received Romney's wrath, as did the President's $787 billion economic stimulus package, which helped bolster small businesses and construction firms, among others. In an Iowa speech in mid-May, he called the government's policy of deficit spending -- that is, spending borrowed money -- a fast-moving fire that threatened to follow the nation's children around for years to come. He has since called for austerity and reform of government entitlement programs, including Medicare and Social Security, as well as a proposal to limit government spending to 20 percent of gross domestic product, down from the current 24.3 percent.

Which candidate do you think would best address your government-contracting pains as president? Leave a comment and let us know.

5 Types of Diets for Healthier Eating