How Square Earned a $3 Billion Valuation 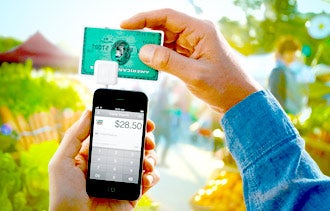 Three years ago, Twitter co-founder Jack Dorsey started a company called Square to offer business owners a new way to accept payments over mobile devices. This week, after closing a $200 million round of financing, the San Francisco-based company is reportedly valued at $3.25 billion.

It's enormous news for a startup that has grown from about 150 employees a year ago to more than 400 today. Square says it's processing more than $8 billion in payments each year.

So how has Square managed it? Here are three strategic choices the young company made that helped put it on its current trajectory:

1. Fulfill a need. Square's mission is to revolutionize consumer payments from both sides. Its original device, a box-shaped card reader that attached to mobile phones, allowed users to accept debit and credit card payments by swiping the card through the reader. Its complimentary mobile app could also process payment information that was entered manually.

Everyone from plumbers to food-truck owners suddenly had a third way to get paid besides cash and check, and customers could use their plastic in more places than ever before. Like its predecessor and competitor PayPal, which also shook up the payments industry when it launched its online money transfer service in 2000, Square founded its business on a pressing social need.

Related: How 'NFC' and Mobile Wallets Will Change the Way Retailers Do Business

2. Innovate while remaining focused on your core product. Square's proprietary card reader, or dongle, is still the company's trademark, but it has continued to innovate without distorting its core service.

In May 2011 it announced two new mobile apps, Card Case and Register. Among other functions, Card Case allows users to receive and store digital receipts and to locate Square-compatible merchants. While Card Case expanded Square's customer-side services, Register was targeted at sellers. It turns an Apple iPad into a complete point-of-sale terminal, making it possible to handle a variety of functions in conjunction with an existing Square account -- generating and sending receipts, offering discounts and tracking sales in real-time with a suite of analytics.

3. Expand through smart partnerships. In August, Square announced that it was teaming up with Starbucks to handle all of the retailer's debit and credit card payments at its nearly 7,000 stores nationwide. In return, Starbucks was responsible for one-eighth of the total $200 million in financing that Square raised in its latest funding round.

Square also has partnerships with the retail establishments that sell its dongle. Late last month, the company announced that its card reader was available for purchase in more than 1,000 AT&T stores. The card-swipe reader can now be found at more than 20,000 retail locations in the U.S.