Hands-On With Apple's New Maps for iPhone and iPad

Let the business resources in our guide inspire you and help you achieve your goals in 2021.
Randy Nelson
September 22, 2012 5 min read
This story originally appeared on Tecca 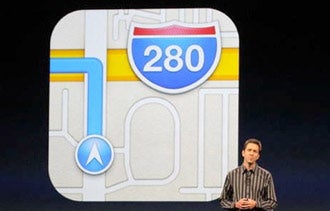 With the release of the latest version of its software for the iPhone, iPad, and iPod touch, Apple has made a number of big changes to the way you use your mobile devices. One of the most notable has been to the Maps app – a go-to resource for iPhone-toting, road warrior entrepreneurs. Originally powered by Google technology, Maps has been redesigned to pull in data from a variety of sources, including popular navigation system maker TomTom and business review site Yelp.

From 3-D visualizations to turn-by-turn directions, here's a rundown of what you need to know about using Maps to get you where you're going:

The new look: The default view in Apple's new Maps app is the same as before: A birds-eye view from above with basic two-dimensional visuals. It looks a lot like what you're used to seeing from any variety of mobile or online mapping services, but it uses vector graphics, so it loads and moves much more smoothly than previous versions.

Maps options display: As with previous versions of Maps, tapping the bottom right-hand corner of the map will peel back the screen and display new basic options. They'll be familiar if you've used maps before. There's Drop Pin, for instance, which lets you place a pin on the map and move it freely, using it as a start or destination marker. "Standard" is two-dimensional with a hand-drawn look while "Hybrid" displays scenery as satellite images with overlaid roads and other info. "Satellite," as you might guess, is pure satellite imagery without annotations.

Related: Guide to iOS 6: Everything you need to know about Apple's new mobile operating system 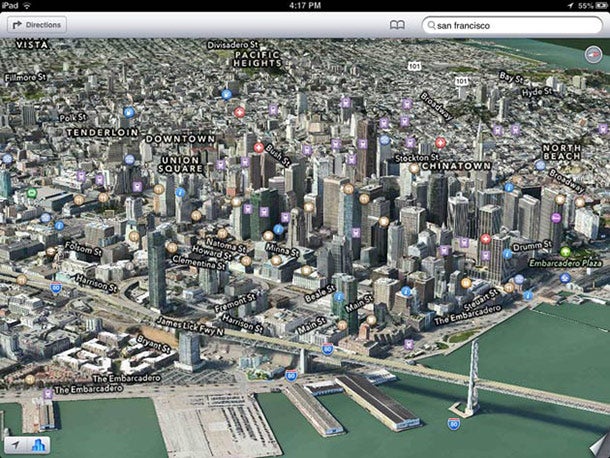 3-D aerial maps: The standard aerial maps look similar to what you've seen in the past, but have more icons for businesses and points of interested overlaid on them. They also load, pan and rotate much faster.

On supported devices -- the iPhone 4S and iPad 2 or better -- you can activate a 3-D mode that renders buildings and other features that can be zoomed and rotated.

Traffic information: You can turn traffic information on and off, just as in past versions. But now you'll see icons indicating accidents and other traffic hazards. Turn-by-turn directions can use the traffic data to display accurate travel times and automatically reroute you around problems.

Tap on a traffic accident or hazard icon in the new Maps and you'll get a detailed account of what the problem is and where it's located.

Related: How to upgrade your iPhone or iPad to iOS 6

Using turn-by-turn maps, you'll be automatically alerted by voice-overs about accidents, hazards and more optimal routes. You can then choose if you want your device to calculate a new route.

It should be noted that Maps has lost a couple of things now that Google is no longer involved. The first is Street View, or the ability to see what the area you're looking at looks like from street level. It also doesn't have walking or public transit directions anymore, something that non-drivers are up in arms about. 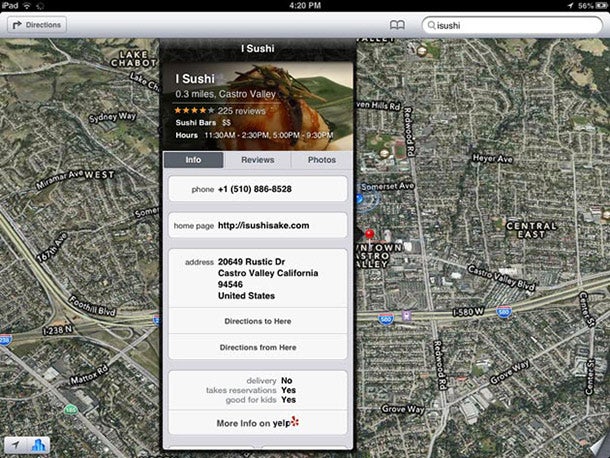 Now's a great time to update your information on Yelp, if you haven't already, to make sure your business is accurately found by customers using Maps.

Selecting the Reviews tab from within the business info display brings up the most recent Yelp reviews of the business you're looking at. If you'd like to read more, you can tap More Reviews on Yelp. You can also check in via Yelp or post a tip on Yelp using two other buttons available on the Reviews display.

You can tap on the Photos tab on a business popup to see Yelp photos taken there by customers. They're pretty small thumbnails, actually, but you can touch them to load larger ones. They'll pop up in Safari or, if you have it installed on your device, within the Yelp app itself (get it for iPhone and iPad). Tapping the Add Photo button also takes you to the Yelp app to upload your own photos of the business.

Related: Users react to Apple's latest software update for iPhone and iPad, and it's not all roses

Are We Slaves to Technology?