In Wednesday's presidential debate, former Mass. Gov. Mitt Romney commented on the weak state of entrepreneurship in the U.S. Specifically, he said, "Over the last four years small-business people have decided that America may not be the place to open a new business, because new business startups are down to a 30-year low."

Thursday morning my inbox was full and I had several phone messages from reporters checking the accuracy of this fact. That’s because I was one of the sources used to check similar statements by Speaker of the House John Boehner (R., Ohio) back in March and Republican Gov. Bob McDonnell of Virginia in August.

The truth of the matter is this: The latest available data from several sources show that Gov. Romney is correct.

While President Obama and Gov. Romney may have different theories about why rates of entrepreneurship in the U.S. have fallen to the lowest levels in 30 years, the facts are these: The federal government’s most current estimates of the fraction of the American population starting new businesses, beginning new-employer businesses, creating new establishments and working for themselves are lower now than at any time since 1977. 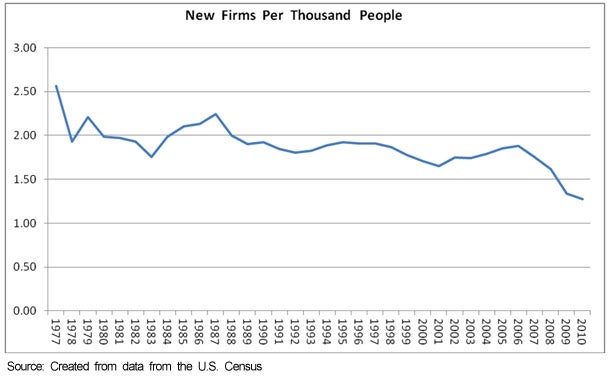