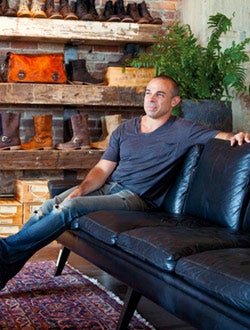 Phillip Nappi was orphaned at age 11. After moving in with his mother's relatives, he lost touch with his father's, knowing only that they were Italian immigrants. While growing up in rural Mississippi, Nappi worked in shoe stores and imagined that one day he would open his own. But even the wildest of childhood dreams couldn't predict how the pieces of his life would come together.

Fast-forward to adulthood. In 1999, Nashville, Tenn.-based Nappi, a salesman by trade, bought a recycling business through a newspaper ad. He learned the industry as he went along, and in 2008 sold the company. He used some of the profits to move temporarily to Florence, Italy, with his wife, Dana, and infant daughter. Naturally curious about his father's family, he wanted to research his Italian roots while looking into the possibility of starting a handcrafted boot and shoe business. His investigation turned up a serendipitous link: While going through old papers documenting his ancestors' passage to the U.S., Nappi was shocked to see that his grandfather, Peter, listed his occupation as shoemaker.

"I called the only living relative who still remembered him and said, 'What's this story about him being a shoemaker?'" Nappi recalls. "He said [Peter] would be working in a restaurant moaning and bitching and wishing he was making shoes."

That insight was all it took to cement the course for Nappi's new enterprise. "We get to continue his passion while fulfilling ours," he says. "So, obviously, we named our business Peter Nappi." The brand's slogan reflects this revival: "Born 1887, established 2009." 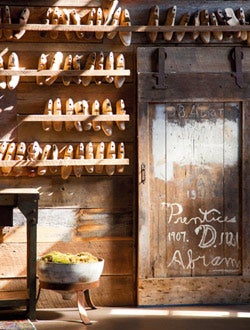 Despite a rocky economy that wasn't exactly conducive to launching a luxury brand, Nappi spent his time in Italy knocking on doors in search of a leather craftsman willing work with him.

He found a family with a 78-year-old patriarch capable of making the classic-look boots Nappi had designed.

With production lined up, Nappi and his family returned to Nashville, and in June 2011 opened a studio that sells the high-end, Italian-crafted boots for men and women, as well as other leather goods. Peter Nappi boots, which retail for $545 to $795, were featured in fashion publications like GQ, Lucky and Harper's Bazaar and embraced by musicians such as members of Kings of Leon and The Black Keys. The core target audience is 35- to 54-year-olds with household incomes of $150,000 or more.

The boots are currently available in the Nashville studio--a converted meatpacking warehouse with a stage for live music performances--and through the company's website. (At press time Nappi was in discussion with some high-end retailers and had interest from several major department stores.)

Nappi, whose company is completely self-financed, is also exploring investor opportunities that would help grow his current collections and wholesale business, and expand the brand into additional lines, such as apparel. He says revenue should reach $500,000 for 2012 and double that for 2013.

Launching in the midst of a recession may have seemed counterintuitive, but for Nappi it was advantageous. "If the economy had been really strong when we started, I don't think [the craftsmen] would have even talked to me," he says. "They would have said, 'This guy doesn't really know what he's doing, and we don't have the capacity for him.' But because the economy was slow, they said, 'He's placing an order. We're going to take it.'"

Turns out Nappi picked just the right moment to revisit his family legacy. It was, he admits, "fortuitous timing."

4 Tips for Simplifying Due Diligence (and Why It's Even Needed)