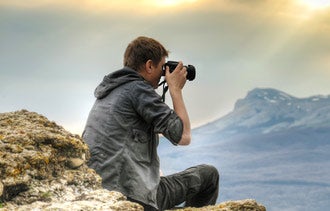 The Jetpac iPad app scours Facebook to gather travel photos shared by users' friends, then compiles them to create travel guides. Led by Silicon Valley veteran Julian Green and big-data expert Pete Warden, Jetpac developed technology to detect where photos were taken--even if they aren't tagged--by analyzing related text, such as a caption or album name. But that wasn't enough for the audacious startup--the team wanted only the best photos to surface.

"What Jetpac is intended to do is be inspirational … in terms of beautiful photos [and] beautiful places that give you ideas of where you want to go," Green says. To achieve that, they needed an algorithm capable of distinguishing good photos from bad, but their three-person company lacked the time and money to develop it.

The Fix
Jetpac had manually rated 2 million photos, separating the inspirational from the dull, and discovered that certain words were associated with good photos. To develop an algorithm capable of coming to the same conclusions as a human evaluator, Warden suggested they turn to Kaggle, which hosts competitions seeking solutions to problems related to online data analytics and predictive modeling.

Jetpac created a three-week Kaggle competition with a $5,000 prize pool to be divided among the top three solutions. "As a startup, you are just looking for ways to leverage [outside resources], and when you can get the best people for the job in a way that is quick and that doesn't require you to do it yourself … then you can behave like a team of five instead of three," Green says.

The Results
More than 200 teams participated in the competition. The top three algorithms were essentially equally accurate--matching a human opinion 85 percent of the time--but Jetpac picked the one with the easiest implementation.

With the code installed, the free app, released in April, has since indexed more than 1 billion photos. That track record helped Jetpac land $2.4 million in Series A funding led by Khosla Ventures.

Green says Jetpac is working to move beyond Facebook to include photos from Instagram, Flickr and Google+ as well as to add the option to search photos by activities, such as hiking or sailing.

A Second Opinion
Jason Taylor, founder and president of Frisco, Texas-based Code Authority, which provides custom software design and development services, applauds the use of crowdsourcing for code development. "Communities like Kaggle allow bright and motivated individuals to socially and professionally connect and then compete not only for monetary gain, but with each other for recognition," he says. "In this case, this paradigm made it possible for the startup to 'invent' the technology upon which its platform was based for a fraction of the cost."