Vintage-Style Bags Get a Boost From Online Marketing 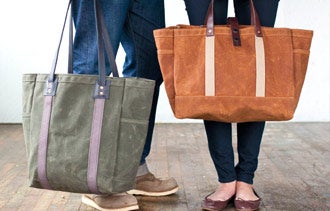 In February 2010, after playing around with an industrial sewing machine and commercial cutting table he bought via Craigslist, Chris Hughes launched Artifact Bag Co. The Omaha, Neb.-based business sells handmade, American-sourced, waxed canvas and leather bags (priced $65 and up) through Etsy, the crafts marketplace.

His small workshop drips with vintage industrial aesthetic: hardware-filled muffin pans, swaths of high-quality Horween leather spilling out of metal bins, walls lined with vintage hand tools. But the leathersmith's big break was anything but old-school: Hughes credits his initial success to a Twitter exchange with an influential design blogger.

In 2010, after a year of quietly following Michael Williams' style blog, A Continuous Lean, Hughes spotted a tweet about a set of chairs that the blogger thought looked cool but were overpriced. Turns out, Hughes had won those exact chairs on eBay, and he commented on the post. Then he crossed his fingers, hoping Williams would take a few seconds to click through to the Artifact website.

Within an hour, Williams' pivotal tweet came: "This waxed canvas lunch bag is nice-looking" (with a link to the item). Soon the fashion press came calling, and after the tote was featured in A Continuous Lean's holiday buying guide, Hughes found himself with a more than 400-unit backlog that took six months to whittle down, even with the help of contract workers.

"A lot of artists make great products but don't know how to leverage the internet. And if you don't make enough from local sales, you have to go online," Hughes says. But he warns that it's easy to abuse social media. The thing to remember, he notes, is that you must contribute "thought capital," such as his relevant reply to Williams' tweet.

Thought capital extends to Artifact's new online storefront, which is much more than a simple shopping portal.

"E-commerce works only if you present the product right," Hughes says, stressing the importance of video and high-quality blog content to help tell the company's story. "I don't have customers who get to hold and smell the bags, but I've found that people respond to knowledge of how things are made."

Cash-flow positive within months of opening and without outside investors, Artifact is on the verge of a new chapter. Hughes is expanding his product line to include aprons and briefcases, while moving ever closer to apparel. Throughout the process, he has turned down lucrative orders from department stores, because "bigger isn't better if it means I have to compromise," he says. He plans to continue using contract help to meet seasonal or press-driven demand and keep his overhead low.

For now, Hughes expects growth to come almost exclusively through his digital efforts. "I've collected a lot of e-mail addresses, but I've never pestered anyone," he says. "I think it's time to start communicating, maybe with a short monthly e-mail or newsletter." Of course, he adds, "I'll only write when there's something to say."