Like a lot of college students, Max Chautin went to his share of keg parties while studying political science at Johns Hopkins University. But for the 2011 grad, sipping cold beverages was about more than socializing--it was a form of market research.

"We were spending $20 on ice and watching it melt," Chautin says. "It made sense to have an insulating barrier that kept the beer cold and eliminated the need for ice."

In the midst of designing a keg-size "koozie" to keep beer chilled, Chautin, now 23, realized that unadorned kegs represented an untapped marketing opportunity. He devised a plan to make his reusable wraps more profitable by customizing them with brand logos. "Kegs are such a high-profile fixture at an event," he says. "It didn't make sense that companies weren't taking advantage of the blank space on the keg." 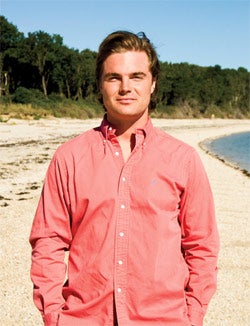 In 2011 Chautin invested $10,000 of his personal savings to design and manufacture prototypes of the product he dubbed KegSkins. He tested various materials, including foam, cork and gel, and experimented with intricate fastenings.

"At the first stage of design I lost sight of what I initially wanted to accomplish," he says. "I [was] focused on creating an advanced piece of machinery."

It took months for Chautin to settle on foam and neoprene in a zippered design that wraps around the keg for a tight fit. In March he placed an order for 1,000 skins and started marketing.JD Kollar, banquet beverage manager at The Venetian in Las Vegas, saw potential for KegSkins as part of the hotel's beverage program. "In the past, we put kegs in 55-gallon trash cans, filled [the trash cans] with ice and wrapped them in white linen to make them look presentable," Kollar says. "It added four hours of labor before we could even set up the bar."

In June Kollar purchased KegSkins for a private pool party for 8,000 guests. Even though temperatures topped 95 degrees, the neoprene wraps kept 80 kegs of beer cold for five hours.

KegSkins have also been adopted by Wrigley Field and by Mom's Food Concessionaires (which provides food and beverage services to outdoor venues). Meanwhile, Chautin is in talks with beer companies like Budweiser about potential licensing agreements. "It's pretty wild to create a concept and go through the whole process of [designing] and marketing it to having legitimate businesses and corporate brands using it," he says. "It's surreal."

In the first six months, KegSkins generated $40,000 in revenue. Chautin estimates that corporate clients account for 70 percent of sales.

Consumers, who can purchase the product through Keg-Skins.com for $39.95 to $49.95, account for the remaining sales.

Now, instead of kicking back and tapping a keg wrapped in one of his KegSkins, Chautin is pursuing $500,000 in venture capital to fund patent applications, product enhancements, licensing agreements and marketing expenses. But he's not above a toast to his achievements. Says Chautin, "I'm most proud of taking the chance to create my own vision."