The backlash over Facebook's Promoted Posts feature and a dramatic drop in fan engagement is heating up. Billionaire entrepreneur Mark Cuban says all of the around 70 companies he owns or has invested in are now shifting their social strategies away from Facebook in favor of Twitter and other networks. Like other business owners, he's fed up with Facebook's pay-for-reach strategy.

The problems started this summer when Facebook introduced Promoted Posts, which allows business Pages with 400 or more "likes" to pay so that more fans see their posts in their News Feeds. But many businesses that aren't paying for the extra reach are now experiencing a significant drop in fan engagement -- as much as 50 percent in some cases.

Facebook says this might be result of a change it made to its algorithm -- commonly referred to as Edgerank -- in September to highlight only the most engaging posts from brand Pages.

But there's at least one way for brands to try to overcome their latest frustrations with the giant social network. Facebook is rolling out a new way for users to make sure that every post from the brands and Pages they like most make it into their News Feeds. To do so, fans can click on the "Get Notifications" option under the "Liked" button on a brand's Page he or she is following. Brands can encourage their fans to enable this feature. The more fans that activate it, presumably the greater reach brands will have. 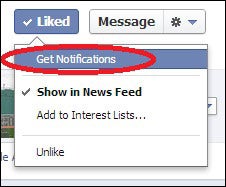 Brands can also try requesting that users add them to their Interest Lists. Users can either create or subscribe to other peoples' lists for topics they care about, such as business or technology, and get updates from the Pages on those lists.

Additionally, Facebook is testing another new feature that will allow users to view only the updates from Pages they like in a separate, single stream called "Pages Feed." It's not yet clear whether Facebook will filter this stream or not.

Have you experienced a drop in fan engagement on Facebook? Let us know in the comments below.

This LinkedIn tool could boost your sales