What do you get when you join a Carnegie Mellon robotics engineer with a Northwestern MBA grad? In the case of 4moms, a whole new take on the stroller and infant seat. Now flush with $20 million in Series A funding from Bain Capital Ventures in Boston, 4moms can add more designers, engineers and production staff to its inventive child-care products business.

The guys behind Pittsburgh-based 4moms, Rob Daley and Henry Thorne, joined forces in 2003 on their first product, a digital shower controller, which generated more interest from mothers worried about scalding water than from their intended target market of male gadget geeks. Intrigued, Daley and Thorne turned their attention to what's known as the juvenile market. They formed a focus group that included Daley's wife and four of her friends, who unspooled a wish list of features they found lacking in the products they used with their small children every day.

"Ultimately, we learned that these moms wanted products that were as elegant and cool as they saw themselves. We realized they didn't want monkeys or giraffes on their stuff," Thorne says. 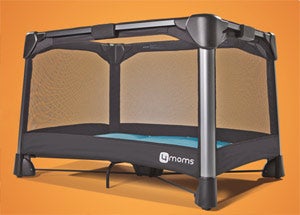 Daley and Thorne set out to bring an Apple-like design and engineering aesthetic to the world of strollers and play yards. Their Cleanwater Infant Tub allows clean water to flow into a baby's bath while draining the dirty water. The Origami stroller opens and closes with a simple turn of a knob and touch of a button. And the mamaRoo, an infant seat that uses a dual-motion robotic platform to mimic parents' movements, is an alternative to the bouncy seat. The company also recently launched its version of a pack-and-play portable crib, the Breeze play yard, which opens and closes with one hand in a single motion.

Response from the public has been positive, to say the least. 4moms has enjoyed growth of 200 to 400 percent per year and projects 2012 revenue of $18.5 million. But Daley and Thorne knew from the start they needed funding to scale and fill out their long-term business plan: investing in R&D and in a supply chain to handle orders from a growing list of stores (500 and counting) in 26 countries. "We have 13 wish-list projects, but we could only [actively] develop five of them," Daley says.

Enter Scott Friend, managing director at Bain Capital. "We like really strong barriers to entry, like unique intellectual property or complexity with the operation, so that it's not very likely that 10 other competitors are going to jump into the market and eat their lunch," he says. "Mixing sophisticated robotics with kids' products gives 4moms those competitive advantages."

The funding round, which closed in August, will allow 4moms to focus on product development. Meanwhile, Friend's team at Bain is helping with the search for a candidate to head 4moms' marketing. As growth fires up with new investment and talent, Daley is optimistic about 4moms' future as a company known first and foremost for design.

"When the company started, Henry and I had this shared vision of how important good design was," he says. "It still is, and everyone on the industrial design team knows their jobs are well-assured."