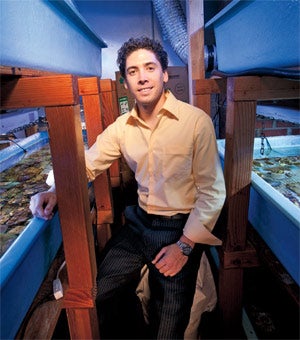 Neon-tipped blue Ricordea Yuma coral is hard to find. Ian McMenamin has a waiting list of clients looking for the rare species, which sells for up to $2,000 per one-inch piece. "In other industries, when demand goes up, you can call the factory and increase production," he says. "You can't do that with coral."

The 26-year-old became fascinated with coral while working in a pet store as a teenager. He recalls lingering near the saltwater tanks, mesmerized. "The crazy colors looked like something out of a Dr. Seuss book," he says.

He soon learned that the more colorful the coral, the higher the sale price. He became intrigued with the idea of growing and selling it himself.

McMenamin saved the wages from his part-time job and invested in coral. Armed with a small syringe, he experimented with various diets for his living specimens, ranging from fish food to brine shrimp, and discovered that a high-protein regimen helped his coral grow. When McMenamin began selling his output, he met customers in parking lots to show off his products. "It must have looked like a drug deal, trading small baggies for cash," he jokes.

"The coral wholesalers pull in container-size chunks. I make sure that colonies can be grown so you don't have to keep going out and devastating reefs."

Over time, McMenamin managed to grow pieces of coral ranging from the size of an eraser head to one measuring more than 4 square feet. As he became adept at growing rare varieties, demand increased. In 2009, during his sophomore year at the University of Oregon, McMenamin pulled $12,000 from his savings account to purchase equipment and launch his company, Anything Coral.

Today McMenamin rents a 1,500-square-foot room in the basement of his apartment building in Eugene, Ore., where he grows more than 400 types of coral. He has expanded the business from parking-lot hand-offs to an international operation that caters mainly to wholesalers and consumers who maintain the specimens in their own aquariums; some display their coral outside tanks as art pieces.

McMenamin says it can take months or years to develop the delicate organisms before they are suitable for sale. He constantly monitors temperature, lighting and pH levels in his aquariums. Still, he admits that some factors are beyond his control. "Growing coral is like setting up an ecosystem. If it's not in balance, it will fail," he says. "Anything can happen in your tank--a snail getting caught in the filter, bacteria--that will wipe out your investment in a matter of hours. It's a risky business."

Though he declined to disclose sales figures, McMenamin says Anything Coral ships to more than 300 retail and 30 wholesale clients, including Pet Time in Eugene, Aquatic Central in San Francisco and Elegant Corals in Delray Beach, Fla.

The opportunity to do something he loves outweighs the risks for McMenamin, who graduated this year with a degree in business and entrepreneurship. He says he is proud of having created a mission-based business using sustainable methods. "The coral wholesalers pull in container-size chunks of coral from the reefs," he explains. "I make sure that colonies can be grown so you don't have to keep going out and devastating reefs."