Truffle Fries With That? Fast-Food Franchises Spice Up Their Menus

A little over a decade ago, the primary spokesman for Taco Bell was a wildly popular talking Chihuahua, who, despite becoming a cultural phenomenon and spawning a line of plush toys, did little for the company's bottom line. Today the face of Taco Bell is quite different: Lorena Garcia, a Venezuelan-born chef who has served as a judge on America's Next Great Restaurant, competed on Top Chef Masters and runs the Miami-based Lorena Garcia Cocina restaurants.

So why is a company with the reputation for serving the junkiest of junk foods (such as the infamous Doritos Locos tacos, in shells made of Nacho Cheese Doritos chips) having a critically acclaimed chef endorse its product? Because fast food is going upscale, baby--or at least as upscale as a 30-second drive-thru order can get.

In the last year quick-serve restaurants (QSRs) have begun adding bigger, fancier items to their menus. Salads have blossomed from wilted iceberg lettuce dotted with chicken cubes and ranch dressing to lush beds of greens with candied walnuts, berries and vinaigrettes. Lava-hot Styrofoam cups of joe have morphed into iced mochas, caramel frappés and espressos. Twenty years ago, fast-food companies advertised lettuce and tomato as the ultimate in burger decadence (remember the McD.L.T?). Today consumers snarf down burgers piled high with portobello mushrooms or Gouda cheese without a thought.

Has fast food finally grown up and realized that younger generations are looking for something better? Are these companies realizing that salt and fat are not the only flavors Americans appreciate? There might be some of that going on, but the real motivation appears to be fear.

"They're chasing the fast-casual segment," explains Bonnie Riggs, restaurant industry analyst for Port Washington, N.Y.-based NPD Group. "That's exactly what's going on. We've been tracking fast food for well over 30 years, and during every period of recession and economic downturn, fast food has never experienced this kind of poor performance for this long a period of time. In 2009 the sector experienced negative growth, then leveled off. It's not growing, nor is it forecasted to grow."

During that same period, however, fast-casual restaurants--concepts like Panera Bread, Chipotle, Noodles & Company and "better burger" joints like Five Guys--have crept up from less than 1 percent of total restaurant industry traffic at the beginning of the decade to 4 percent now, actually growing during the economic downturn. "Quick serves are looking at what fast casual delivers that consumers find so appealing," Riggs says. "The cost of fast casual is not that low compared to fast food, but consumers are willing to pay more because they feel it delivers on the value proposition. It's fresh food, reasonably fast and good tasting. Fast food sees this happening, and they want to jump on the bandwagon."

That's where chef Garcia's partnership with Taco Bell comes in. Cantina Bell, a product line created with her input, is Taco Bell's attempt to get in on the "fresh-Mex" trend, which emphasizes fresh ingredients, usually cooked in view of customers and customized to their liking. Taco Bell's version incorporates many recognizable fresh-Mex menu themes, like cilantro-infused rice, black beans, grilled chicken and a roasted-corn salsa.

"The Cantina Bell menu came from a few places," says Brian Niccol, Taco Bell's chief marketing and innovations officer. "Many of our great West Coast franchisees were picking up on the fresh-Mex and fast-casual Mexican trend and brought it to our attention. At the same time, we were on a mission to evolve the brand and to make Taco Bell more relevant. Consumers were pushing us from the idea of ‘food as fuel' to ‘food as experience.'"

Similar pressure has influenced fast-food burger restaurants, which are struggling to remain relevant in a market in which Five Guys, Shake Shack and Smashburger have raised consumer expectations from smashed hockey pucks with onion and ketchup to more serious fare. McDonald's was one of the first to catch on, coming out with its Angus Third Pounders in 2009. Wendy's tried to get in on the act with its Dave's Hot 'N Juicy burgers.

But fast food is still fast food, and it's difficult for such companies to replicate the fast-casual model without sacrificing speed and value. Analyst Riggs believes it's worth trying, or they will potentially suffer more than they already have. "I think many of them are trying to have at least a premium offering on the menu," she says. "I just think it's difficult for them to get that type of thing into their systems."

Menu tweaks aren't the only way QSRs are trying to compete. For many concepts, updating their interiors is just as important. Instead of moving customers in and out as quickly as possible, they're designing spaces that encourage lingering. "People like things that are new," Riggs says. "They like concepts that are bright and clean. Cleanliness and service have a lot to do with the restaurant experience, and fast food is going to have to upgrade. If they don't, they don't stay relevant. That's when you start to lose ground. That's what happened in family dining, like Perkins, Old Country Buffet and the steak-and-buffet concepts. That segment of restaurants has been declining for years."

One company that is focused on keeping customers in its dining rooms as long as possible is Tim Hortons, a beloved institution in Canada that has slowly moved into the U.S. (it has about 730 units in mostly northern states). The company realized that its drip coffee and crullers weren't going to cut it with an American audience that has moved on to macchiatos and panini. So Tim Hortons launched a bakery/cafe format in the U.S., adding espresso drinks and an upscale sandwich menu. It also updated its logo and outfitted its stores with club-style seating, flat-screen TVs and digital menu boards.

"This is more about staying relevant, which is something we've tried to do for the last 50 years," explains Mike Meilleur, executive vice president for Tim Hortons U.S. "We keep up with the current times, and we're really trying to invite our guests to stay longer. We want to meet their needs, whether they just want to go through the drive-thru or if they want to settle down and read a book or watch TV."

In the last few years McDonald's also has rolled out a more inviting format, McCafé, in Europe and in parts of the U.S. It's an acknowledgement that consumers' relationship with fast food could be changing, and that the restaurants can become another place to hang out, similar to cafes, bookstores and fast-casual concepts.

"Our relationship with our customers is unique," says Hortons' Meilleur. "Forty percent of our customers are in the restaurant five times a week, and usually once on the weekend. We're part of their routine. For them, it's like coming home. I see meetings taking place, real-estate transactions, people reading books in our lounge chairs. It's a warm environment."

The big question is, can QSRs be all things to all people? Can they offer a fast and cheap meal for drive-thru customers and premium selections for upmarket eaters? Can noisy counters coexist with a reading room just a few feet away?

Niccol says the Cantina Bell line at Taco Bell, which has no pretensions of turning itself into a cafe, fit nicely with the standard menu. "When you need speed and convenience, there's no better solution than QSRs," he says. "What fast-casual has done is reframe what a burrito can be. Once you combine that experience with our speed and convenience, it really appeals to customers. We're already seeing more female customers and higher-income customers. It's not a dichotomy; Taco Bell is a brand with broad shoulders. It can support both."

Indeed, Taco Bell is not ready to bet the farm on its new gourmet fare--in November came word of the launch of "loaded grillers," the ultimate junk-food fantasy, consisting of nachos or baked potatoes squeezed into a tortilla.

Still, Riggs is not sure fast food can tamp down the rise of fast casual, which is primed for double-digit unit growth in the next few years. "We're moving into a very difficult time at the beginning of the year. Commodity prices are going to increase because of the drought, and I think fast food is going to have to offer up an even stronger value proposition," she says. "I think it's going to be very difficult for them to compete with fast casual."

Which means get your drive-thru blue-cheese burger with leek aioli now--it may only be here for a limited time. 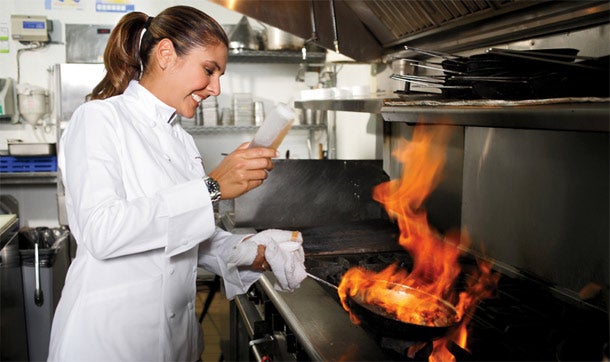 The Dish
Chef Lorena Garcia talks cooking for the masses

Lorena Garcia is a respected chef who has helmed critically acclaimed restaurants and appeared on top-rated cooking shows. So how did a leading culinarian get mixed up with Taco Bell? We sat down with Garcia to find out why she took the job and how the public is responding to Cantina Bell, her fresher, more flavorful take on fast food.

How did you get involved with Taco Bell?
We've been working together now for about two years. In the beginning I was a little surprised that they called. In my life as a professional I never did anything in a fast-food environment. They asked me what I would change, what I would bring different to the table. It was a fantastic opportunity to reach more people and a challenge to figure out how to make Taco Bell more relevant. We went back and forth with different recipes and ingredients, figuring out how to make food that was executable and portable. In the end, Taco Bell said the process helped them fall in love with food again. It's been a perfect partnership.

Do other chefs give you grief over your foray into fast food?
You're always going to find skepticism, and people are going to say you sold out your beliefs. It's easy to sit down and criticize someone. But listen, at the end of the day what I say is that I have a chance to change people's perception and really showcase what you can do with a fast-food platform, and for less than $5 or $6. That's real change.

Do you think this type of partnership could catch on at other fast-food restaurants?
I wouldn't be able to tell you what other companies could do. But this is what I've realized from working with Taco Bell. Foodies are able to go to my restaurants and spend $15 or $20 per plate. For the majority of Americans, that's out of their reach. But fast food can reach so many, so we want to give them a menu focused on fresh ingredients.

What's next for you and Cantina Bell?
Stay tuned--the menu we're creating is amazing. People will be shocked by the quality of the quesadilla we're working on. We've been developing new recipes for steak, carnitas and salads. I cannot be happier to be working closely with Taco Bell to make revolutionary food in this environment.