Ketan Rahangdale felt tied down. A DJ who spent his nights spinning records at clubs, Rahangdale was tethered to his equipment; with his headphones connected to the turntables and mixer, it was difficult to maneuver around the DJ booth or move to the music.

"There were a million wires, and it took hours to set up," Rahangdale recalls. "I remember thinking, ."

Rahangdale wanted to investigate the possibility of creating a device to replace audio cables. As a freshman in Babson's entrepreneurship program, he worked on a business plan and sought out partnerships with engineers to develop the technology for wireless headphones. He later transferred to the University of Miami to be closer to those partners.

"At first the plan was to come up with a toy, a plaything just for me," he says. "Going into [research and development] I realized how much it would cost to develop the concept, and it made me think bigger."

Rahangdale entered business-plan and elevator-pitch competitions with his startup, which he called EarTop. He reached the finals in several, which provided him with the legal and marketing support he needed to move forward. Encouraged, he sought out and raised $250,000 in angel funding, mainly from an investor he knew through his personal network. 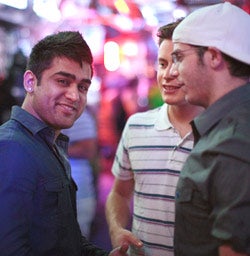 It took six months of R&D before the first product, Flow, was introduced last year. Flow plugs into the 3.5 mm cable jack on headphones or other audio equipment and uses enhanced Bluetooth technology to transform them into wireless devices, without sacrificing sound quality. EarTop has filed six provisional patent applications for Flow. "After months of trial and error, when it finally works exactly how you want it to, it's a huge accomplishment," Rahangdale says.

The Startup America Partnership and Empact named Rahangdale one of its Empact100, a group of the top entrepreneurs under 30 with annual revenue of more than $100,000. "I never planned to start my own company," he says. "Growing from a concept into an Empact100 company in less than nine months is totally overwhelming."

Susan Amat, co-founder and executive director of The Launch Pad, an incubator for entrepreneurs at the University of Miami, is not surprised by EarTop's success. "Ketan is a dynamo, and his passion, drive and desire to solve a problem are so inspiring," she says. "When he first came to [The Launch Pad] he had an idea and was going to do whatever it took to achieve that vision at a world-class level."

EarTop announced presales of Flow last summer. While Rahangdale declined to provide specific numbers, he noted that sales were much higher than projected. More than 15 national and international retailers and distributors have signed on to sell Flow when it officially hits the market in March with a suggested retail price of $80. With expectations of first-year revenue in the tens of millions, Rahangdale says, "This whole process has taught me how to dream big."