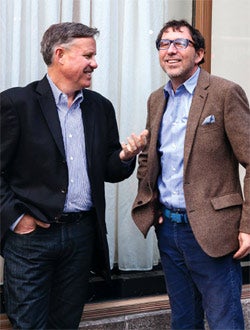 What It Is
With Yumani's fresh take on online auctions, registered users can either search the site's online catalog or post items they wish to buy, such as electronics or home goods. Participating retailers then compete for the sale by bidding down the price. For an even better deal, multiple buyers looking for the same product--say, a 50-inch Sony LED HDTV--can form purchasing blocs through the "Yunite" feature and score a group discount.

How It Started
Serial entrepreneur Henry Zilberman hated spending time searching multiple websites to find the best deals. His dream was a site that inverted the process: One place where he could post the items he wanted to buy and have retailers offer him their best price.

When he couldn't find such a place, he created it. He hired as CEO tech veteran Michael O'Hara, who previously headed the marketing platform XMPie, which was acquired by Xerox in 2006 for $55 million.

Why It Took Off
On the day of its October 2012 launch, Yumani spent roughly $300,000 of its $2 million angel investment on advertising via internet, national TV ads and local radio spots in its New York City market. Less than a month after going live, the site was already attracting 35,000 unique visitors each week. On average 11 percent of visitors to the site complete a registration; 71 percent of those who have registered have also posted an item for retailers to bid on. Not all have purchased, however.

The Business Case
While some online sales channels charge hosting, listing or other fees, Yumani takes a straightforward 6 percent cut of the sale from the seller. Purchase prices have ranged from $10 for a memory card to several thousand dollars for high-end electronics.

O'Hara expects the company to break even by July. He won't release exact revenue figures, but says Yumani anticipates hitting $25 million to $30 million in sales sometime in the first half of 2013.

What's Next
Yumani will be investing in advertising and expects to close a $3 million to $5 million round of venture funding next month. It also plans to launch a business-to-business feature that will facilitate large-scale purchases of office equipment and supplies--an area in which O'Hara expects to see major growth.