By Michael Goldberg January 21, 2013
Opinions expressed by Entrepreneur contributors are their own.

Quang Mai Duy, the dynamic CEO of the Vietnamese start-up company Biaki, has a problem.

Despite Biaki's initial progress in developing its CRM software solution for the Vietnamese market, Quang is having a hard time raising capital in Vietnam. Angel investing outside of the family is almost non-existent in Vietnam and there are relatively few venture capital funds in the market that would consider an investment in Biaki.

Contrast that with the U.S., where there has been a rise in the availability of early-stage capital for American entrepreneurs from angel investors, accelerators and crowdfunding sites. But unfortunately for international entrepreneurs such as Quang, this capital is not flowing from U.S. investors into emerging markets such as Vietnam that have plenty of room for growth.

Partly to blame is a delay in the Securities and Exchange Commission's release of regulations to govern crowdfunding, which had been expected in 2012. In April last year, President Barack Obama signed into law the Jumpstart Our Business Startups (JOBS) Act, which is intended to greatly reduce the restrictions on equity crowdfunding for small businesses. But the SEC has yet to hammer out details, meaning even U.S. entrepreneurs who currently use crowdfunding portals (such as Kickstarter or IndieGogo) can only attract "investors" with products or token gifts rather than stakes in their business. 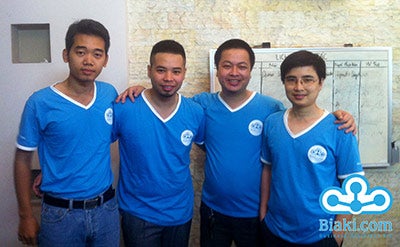 I met Quang and other Vietnamese entrepreneurs earlier this year while based in Hanoi as a Fulbright Scholar teaching entrepreneurship at the National Economics University. While in Hanoi, I was asked to serve as a mentor for the Founder Institute's early-stage startup accelerator program in Vietnam. I helped lead the session for the participating entrepreneurs on raising investment capital alongside several Vietnamese venture capitalists. I was energized by the creativity and passion I found among Vietnamese entrepreneurs and empathized with the challenges they faced locally to raise capital

I became intrigued by the concept of Vietnamese entrepreneurs potentially accessing capital via crowdfunding from investors in the U.S. and elsewhere.

While it is true that investors typically prefer to deploy capital in companies that are in driving distance, I knew that there are a growing number of U.S. investors with an interest in investing in the growth and development of an emerging market such as Vietnam. I met several Vietnamese Americans who had success with technology companies in the U.S. and were starting the process of building networks back in Vietnam to support entrepreneurship such as Cali Tran, a venture capitalist at North Bridge Venture Partners, and Nam Do, CEO of Emotiv, both based in Silicon Valley.

One challenge to entrepreneurs like Quang is to get their presentation materials and investment pitch to the same level of their competition in the U.S. Perhaps the key to unlock the investment dollars will be partnering with American business-school students, like mine at Weatherhead School of Management at Case Western Reserve University, to work the kinks out of their presentations before they go live on a crowdfunding site.

Upon returning to the Weatherhead this fall, I decided to create a new seminar for students focused on trends in Asian venture capital. I assigned groups of students to work with five Vietnamese entrepreneurs who were graduates of the Founder Institute program to help them revise their pitches for eventual posting on a crowdfunding site. I also asked them to provide an assessment to these entrepreneurs whether crowdfunding was a viable option for them to raise capital outside of Vietnam.

Many first time entrepreneurs struggle to put together a first-rate pitch for investors. Trying to put together a successful pitch in a second language is even more of a challenge. The initial presentations that the Vietnamese entrepreneurs sent to my students were rife with spelling mistakes, confusing charts, and growth projections that lacked supporting evidence. My students spent time looking at pitches that had attracted capital on Indiegogo and Kickstarter and engaged with their Vietnamese entrepreneurs to provide them with advice to make their presentations more effective.

But ultimately, because of the SEC delays, none of my student teams could recommend that their Vietnamese entrepreneurs seek equity crowdfunding capital from U.S. investors at this stage. (Like their U.S. counterparts, the Vietnamese entrepreneurs could have used the portals to give away token gifts or simply for marketing purposes, but given the distance, it didn't make sense.)

While recognizing the SEC has to deal with many issues including governance of the Dodd-Frank legislation, the delay in moving forward with crowdfunding regulations is causing entrepreneurs in the U.S. and abroad in markets like Vietnam to wait for what could prove to be an extremely promising source of financing.

Crowdfunding could be a lifeline for foreign entrepreneurs like Quang. Let's hope there's progress soon.

Michael Goldberg is a visiting assistant professor at Case Western Reserve University’s Weatherhead School of Management, in the department of Design and Innovation. He was awarded a Fulbright fellowship in 2012 to teach entrepreneurship at the National Economics University in Hanoi, Vietnam. Goldberg is also a Managing Partner of the Bridge Investment Fund, a venture capital fund investing in early stage Israeli medical device companies.