Want to Make Your iPhone Indestructible? This Case Might be the Answer 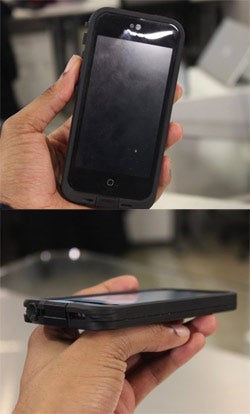 We've been testing a lot of iPhone 5 cases lately.

While we picked out our favorite one here, there's another worth singling out for those of you who want complete protection for your phone, including against spills and liquids.

After sifting through several different companies, styles, textures, and sizes it was easy to select LifeProof as the most protective case out there.

LifeProof's iPhone 5 case fully protects your phone without adding any unnecessary bulk, drastically improving on its model for the iPhone 4 and iPhone 4S.

LifeProof is based around four "proofs": water, dirt, snow, and shock (drops).

The best by far is the LifeProof's waterproofing ability, which can protect your phone for up to 30 minutes when submerged as deep as six feet under water.

LifeProof can also protect your phone from falls from as high as six feet.

Even if you don't fear dropping your phone in a body of water, using the LifeProof in the rain is pleasant, since you don't have to worry about water sneaking into the headphone jack or charging port.

LifeProof has tested its case to meet or exceed Military Standard 810F-516, which means that the case can physically and functionally withstand relatively infrequent, non-repetitive shocks encountered in handling, transportation, and service environments.

Here is a short video of what it's like to snorkel with a LifeProof-protected iPhone. (The case they're using in this demo is for iPhone 4, but the iPhone 5 case works the same in a drastically thinner body).

The LifeProof for iPhone 5 is a solid buy, and it's the case we use almost every day.

LifeProof for iPhone 5 is available in five different colors and retails for $79.99.

​​How Blockchain Ecosystems Are Giving Back To The Environment