The Man Behind a Budding Creative City

Drew Ungvarsky's community-building efforts stemmed from the things he wanted to enjoy as a resident of Norfolk, Va.: an energetic arts scene, alternative transportation, a lively downtown. Over time, he realized that his attempts to improve his lifestyle could have an impact on his professional life as well, by helping his company compete on the hiring front.

The owner and creative director of Grow--a digital advertising and production company with clients such as HBO, Google, Nike, Oakley and Starbucks--Ungvarsky often looked to hire talent from across the U.S. and abroad. But he knew Norfolk couldn't compete with cities with vibrant tech and recreational scenes.

He set out to change that, starting with his own office. He created the type of environment you'd expect to find in Austin or Silicon Valley, with bikes, a ping-pong table and a rooftop garden. The next step was to make Norfolk, itself, a more inviting place to work and live. "The happiness of my employees is directly related to the happiness in their community, particularly in a small city like this," Ungvarsky claims. "When I started to look at relocating talent here, everyone was saying, 'Your work is the same level of work I could do in city XYZ across the world. Why would I choose this place?'" 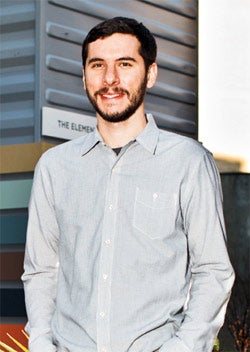 He took action to get more involved in the community. Grow allows its auditorium space to be used for meetings by local organizers and crafts groups and has even offered its facility for use as a pop-up gallery. When a nearby block was abandoned after a development project fell through, Grow helped create a pocket park there; employees donated time to work on the construction, branding and signage. And when Grow needed more space and purchased the building next door to its office, Ungvarsky held a competition for use of the storefront, offering drastically reduced rent to the winner--a restaurant--and helping fund construction.

City officials regularly solicit Ungvarsky for ideas on how to attract companies to Norfolk. He worked to make city parking more amenable to small businesses and bought a parking pass for each of his employees. (Those who don't drive get a $60 boost to their monthly paycheck.) He campaigned to have bike racks installed downtown and to change a city ordinance that limited food trucks in the area.

Grow now has 25 employees; among the eight recruited last year are former residents of Washington, D.C., and São Paulo, Brazil. Next up: Ungvarsky wants to hire a "community builder" to work on local projects, institutionalizing Grow's commitment to change. "What we want is a city people aspire to live in," he says. "We've found that we can create the types of things we want to see far more effectively than even city or state organizations. We just say, 'We want that' and go do it."