How Franchises Worked Together After Superstorm Sandy

The dogs started arriving the morning after the storm. As people awoke to the reality that their homes were flooded, or damaged by high winds, or that the electricity wouldn't be turned back on anytime soon, they began dropping off their pets at Ed and Janice Saxton's home before seeking out that rare hotel with a vacancy.

Soon the Saxtons, owners of a Fetch! Pet Care franchise and one of the lucky families in Bergen County, N.J., that didn't lose power during Superstorm Sandy, were sheltering nine dogs.

At one point, Ed remembers, there were six pups crowded onto the foot of their bed. "I don't think anybody could have prepared for what the hell happened," he says. "It was brutal for a lot of families. Our inconvenience was insignificant compared to what happened to other people."

At the same time the Saxtons were managing their canine charges, Steve Phykitt, also from Bergen County, was literally cutting his way to his Mr. Rooter office in Midland Park. It took two days of chain-sawing uprooted trees and telephone poles, but eventually Phykitt and his crew managed to reopen their franchise. They set up generators for electricity. As soon as the telephones were back online, they were inundated with calls from desperate people needing someone to fix sump pumps and busted pipes and drain-flooded basements.

"The storm raged all night long, and there was nothing you could do, but as soon as the wind stopped I was out," Phykitt recalls. "From the first hour of daylight, the destruction was evident. All I could think about was what we had to do to get through this. It had to be all action. There was no downtime; that wasn't a consideration. I live here. It was very, very personal."

Franchises are often seen as faceless corporate entities, cookie-cutter enterprises divorced from the communities in which they exist. But behind each franchise unit is an owner and employees, and more often than not they're as committed to their communities as a mom-and-pop or locally based business.

At the same time, when disaster strikes, franchises have the resources of a corporate parent to help them get back on their feet quickly. In some instances, they can call in extra firepower. That was the case when Hurricane Sandy ravaged the East Coast last October. While many independent companies took weeks to regain their footing, franchise units benefited from corporate assistance to get back on the job swiftly--especially crucial for disaster-recovery and contracting services, which were desperately needed in their communities.

"The thing I like about franchising," says Mary Kennedy Thompson, president of Mr. Rooter Plumbing, "is that those systems allow you to get through disasters in a way that business suffers as little as possible. The beauty of it is that when something like this happens, you have a system you can follow and a group you can call and say, 'I need help.' It never ceases to amaze me how our system steps up to help one another."

Case in point: When Mr. Rooter franchisees Andrew and Sheryl August lost power and phone service in their Freehold, N.J., unit (they also own one in Florida), the corporate office went into action. "We have very tight systems," Thompson explains. "We were able to get them working cell phones and went into their software, which was on the cloud, and were able to send an e-mail to all their customers saying they were open."

They also e-mailed all of the Augusts' customers with a temporary phone number set up by the corporate office, and were able to send in thousands of fliers, which technicians put on car windows and bulletin boards, letting the public know that Mr. Rooter was up and running.

Servpro, the Gallatin, Tenn.-based disaster-recovery franchise, is also skilled at marshaling out-of-state and corporate resources to assist local units. In fact, Servpro has four Storm Teams covering the U.S. and even has a meteorologist on staff who keeps a close eye on potential natural disasters. When one does strike, the Storm Teams activate, and any able recovery crew travels to the scene of the disaster and picks up overflow work from the local franchisees.

For Sandy, all four Storm Teams were activated; more than 1,000 crews from 250 franchises converged on the Northeast. David Hughes, the Servpro Storm Team leader for the region, set up his command center and helped dispatch teams to more than 10,000 jobs. Beforehand, he reinforced his office in Avondale, Pa., to make sure it would weather the storm, and two days before Sandy made landfall, he started moving tractor trailers of equipment and crews to what were expected to be the hardest-hit areas. 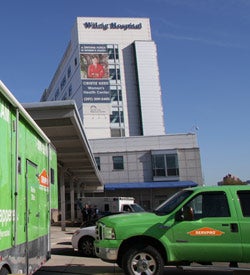 Even with advance preparation, operating in storm-ravaged areas is difficult. Many crews had to find accommodations two or three hours away from where they were working, since hotels were full. Some stayed in motor homes or boarded with local franchisees. And the hunt for gas to operate vehicles and generators slowed the work down, especially because a big part of the job was running heaters to dry out flooded homes. "We put in long hours," Hughes says. "We were there to get as much work done as possible and to try to handle as many customers as we could. We were there to perform a service. We were pleased to help. It was a job someone had to do."

Mr. Rooter franchisee Phykitt appreciates the help he got from corporate, but at the same time, he says, it took great effort and determination on his part to keep operating. He had offers from other franchisees to come in and help, but he redirected them to areas that were easier to reach. "Even if we could get them in, there would have been incomprehensible logistical issues," he says. Instead, local contractors banded together and dispatched one another to jobs they couldn't handle themselves. Phykitt even drove hours north when the roads opened up to bring back several barrels of gasoline. "It was a situation where you had to do what you could do where you were," he says. "That type of thing is not easy to plan for. It happened so quickly and was so widespread. It was such a nightmare pace, fast and furious."

Rainbow International, another disaster-recovery franchise, doesn't have dedicated teams for storms, but the corporate office does play matchmaker for franchisees in need. About a dozen Rainbow franchisees were directly affected by Sandy, and 20 drove in from other parts of the country to lend a hand. In the field they're directed by the local franchisee, who sets the rules and pricing structure. After Sandy, their first mission was to thoroughly dry flooded homes, according to president Rob White. If structures aren't dried properly before reconstruction begins, it can lead to severe mold problems and dry rot.

"I'm proud of the way our franchisees handled the storm," White says. "They have a passion for the communities affected. Even though they were getting a lot of business, when you
hear them talk about the storm, they talk more about community, relationships and helping people out."

Russ Regan, a Rainbow franchisee based in Bohemia, N.Y., on Long Island, had gone to Louisiana to help out after Katrina, but he never expected to see anything similar in his own backyard. He brought in extra teams from Massachusetts, Texas and Maine to cover the work brought on by Sandy, hosting them in his home and in a motor home in his driveway until hotel vacancies opened up. They worked as many jobs as they could, mainly pumping standing water out of crawl spaces and applying biocide to wood to prevent mold growth.

While the heavy lifting has been done, there's a lot of work ahead for a full recovery. "We're now in the rebuilding stage," Regan says. "We're really trying to educate people now to do additional cleaning before rebuilding. A lot of contractors don't know about restoration and mold remediation. It's easier to spend the money now than [to fix] the problems down the road."

Fallen trees and a lack of gas prevented the Saxtons from getting help from other Fetch! franchisees, and vice versa. But corporate kept tabs on them, making sure they were safe and had the resources to do their jobs. Despite the challenges, Ed Saxton says, not a single appointment was missed. He took care of animals by bicycling from house to house, even though what was normally a 20-minute ride to a nearby town now took more than an hour due to the destruction.

That dedication has paid off--even if that was never the intention. "Without a doubt, that strengthened the relationship with our clients, but that is not why we did what we did," Saxton says. "The fallout has been nothing but positive. People remember those things; when you come through in the clutch people appreciate it for a long time. If it has brought us new business, that's a great side bonus. But that's not what we were in it for. We could help, and we did."