After being trapped for years in grey cubicles, Spanx creator Sara Blakely created an explosion of color and creativity when she designed her company's Atlanta, Ga. headquarters. The billionaire entrepreneur isn't the only business owner who believes in the relationship between office design and creativity. Here are three 'treps who have created environments that make employees love coming to work.

Related: Spanx's Sara Blakely on How She Created an Inspiring Work Environment 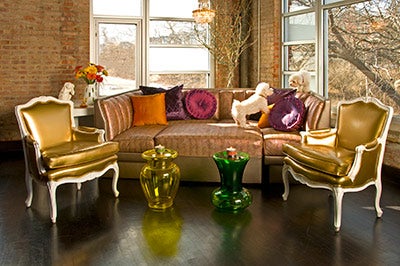 At IndigoWild, every day is Bring Your Dog to Work Day.

Since leaving her job as a communications manager at Sprint to launch the body care line Indigo Wild in 1996, Emily Voth shudders at the thought of stiff corporate culture. The renovated ice factory where her company is located smells like the all-natural soaps, lotions, and home products the company makes even though about 10 employees’ dogs roam the halls. Although loud music fills the building as it did when the building was vacant and used for raves, various parts are now soundproofed so different music can be played without disturbing others. 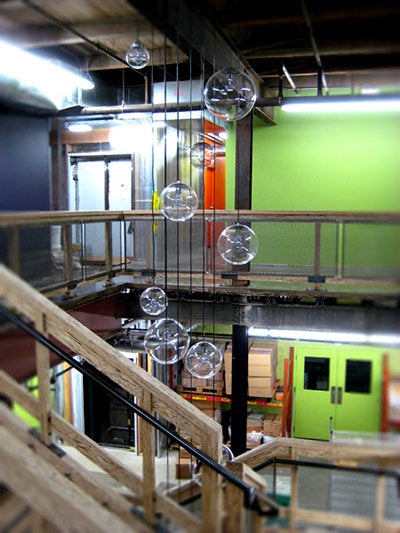 Sustainable materials and calming colors are signatures of IndigoWild's renovation of its factory space.

Calming blues and greens drench the walls, and the renovation used sustainable materials like parallams, which are beams made of repurposed wood, to create a two-story staircase, "to let the chi flow," she says.

Indigo Wild has a big, bright orange kitchen with two ovens and two refrigerators. Voth brings in chefs to cook meals on occasion. At lunchtime, most of the employees eat together in a communal dining space, often ordering in food from area restaurants. The accommodating environment extends beyond décor. To keep her 15 full-time and 60 part-time employees happy, many of whom are artists or musicians, Voth allows everyone to work flexible hours.

"I just love to be at Indigo Wild because it's a whole bunch of just happy Oompa Loompas that like what they do. And we have an environment that works for people's lifestyles," Voth says. 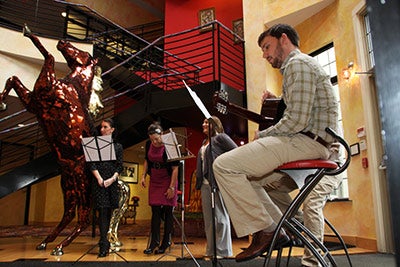 After three feet of snow collapsed the roof of their former offices in 2002, husband-and-wife founders Mike Schwabl and Lauren Dixon needed to relocate their advertising and public relations firm, Dixon Schwabl. Employees, 30 of them at the time, had 72 hours to create a new office wish list. Office temperature controls, windows that open, a floor-to-lobby slide, and primal scream room were all on the lists and each were incorporated into the company's $2.5 million new building, which opened in 2002.

The company has since grown to 82 employees with "almost no" turnover, says Dixon. Windows open to circulate fresh air-- a big morale boost when springtime hits the snowy Rochester area. Cheerful colors are used throughout, with motivational and marketing-specific typography on the conference room walls encouraging employees to “Think Out Loud” and “Create the Buzz,” among other things. Bathrooms have bold, black and white checked sinks with gold rims, designed by home accessories company Mackenzie-Childs. 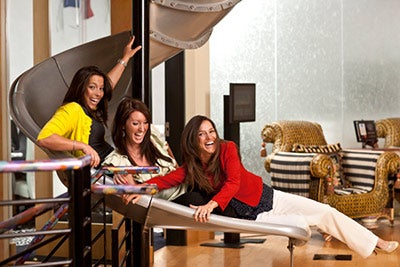 (left to right) PR Manager of Special Events Courtney Rapp, Junior PR Executive of Special Events Jennifer Lynn, and PR Supervisor of Non-Profits Nadine Krimow-General take a spin on the Dixon Schwabl slide, which starts on the second floor and ends in the main lobby of the agency.

The most popular perk? Weekly ice cream deliveries, which employees ranked higher than the company's profit sharing plan, Dixon says. The musically inclined can join the agency rock band, which practices once a week and plays at company events. Others may join the bowling team or just shoot Nerf darts at each other. The company's offices are so popular, that customers ask to host events there and a local college holds a marketing class on the premises.

Related: What Your Desk Says About You 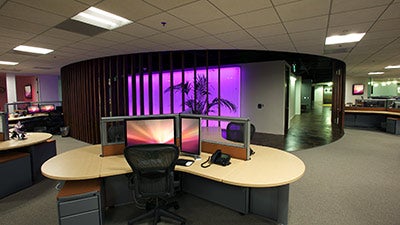 A glass wall is decorative and can also be used to watch movies.

"We're almost overcompensating because we're in a bank building," Dennis Suggs, founder of Cie Games explains sheepishly. But one look around the office, and there's no doubt you're in a space fit for folks who created Car Town, a Facebook game with more than 46 million players, among other social and mobile games. Suggs admits to getting a bit desensitized to the bright colors, open floor plan, and even the conference room doors that are really airplane body halves.

"But when people come in and say 'Holy cow!' That's super cool and it refuels you," he says. It also makes a great impression on prospective new hires who seem eager to work in such a cool space. 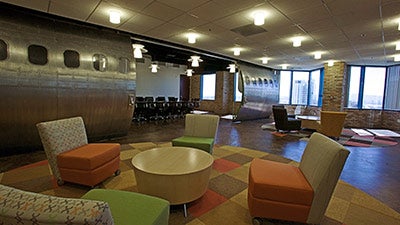 Desks are in clusters, facing each other, making the workspace dynamic, loud, and collaborative, just as Suggs wanted it. Video game challenges are "research." Cie has a glass wall that takes up a large section in the main workspace area that changes colors where game information, such as usage metrics, is often projected. Pink means crunch time while green means celebration. But the wall isn’t all business: on Friday nights, it's used to project movies. After a new game launches, Suggs may spring for drinks at a local watering hole to get everyone out of the office together. Last year, he took his top game design team to Disneyland for inspiration and teambuilding. But it's in the office where the magic happens, he says.

"If you shut people up or if you put them in cubes and tell them to be quiet, you have a dead workspace," he says. "I wanted people motivated and expected to get up and talk about their ideas."

Related: How to Motivate Creative Employees

How a Personal Commitment Helps Your Business Grow

Ready for an Uplevel? Here Are 4 Steps You Should Take to Finish the Year Strong

3 Revenue-Generating Activities for Your Virtual Assistant

Live Streaming Video: What It Is, Why It Matters and How It'll Quickly Grow Your Brand