Editor's Note: Egraphs has gone out of business since this article's publication in the May 2013 issue.

What It Is
Seattle-based Egraphs puts a digital spin on the traditional autograph, blending an electronic version of an athlete's signature with sound files that capture the star delivering personal greetings or advice. Here's how it works: A fan submits a request for an e-graph from, say, Stephen Curry of the NBA's Golden State Warriors. Egraphs forwards the request to Curry, who uses a proprietary iPad application to sign a digital image file of himself on his iPad and record an audio message. Egraphs authenticates the document, and within about two weeks the fan receives a link to view and download Curry's message. 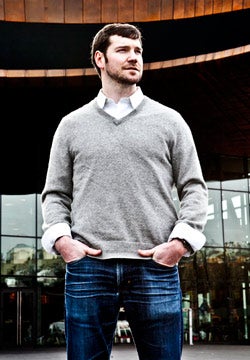 How It Started
As an executive for pro baseball's Tampa Bay Rays, Egraphs co-founder Brian Auld noticed the proliferation of players using iPads in the clubhouse. He wondered if there was a way to leverage those tablets to make it easier for the athletes to interact with fans. He recruited his tech-whiz brother David to build a platform that became Egraphs.com. In 2011 they secured $1 million in seed funding to bring it to market.

"I know that immediately before and after games, these guys have lots of time on their hands," David Auld says--time he figured could be used to make some extra dough signing autographs.

Why It Took Off
The 300-plus participating athletes like Egraphs because they are signing personalized autographs for true fans, not money-hungry collectors who turn around and resell a signature for twice the price. Fans love it because the messages are truly for them. Notes have included everything from words of encouragement to recommendations for the best lobster roll in Boston. And it's convenient: Fans can download an e-graph onto a computer, display it anywhere they like and forward it to a friend.

The Business Case
Pricing ranges from about $25 to $100, depending on the athlete; customers can order a framed photograph print of the autograph for an additional $45. Auld says players receive the "majority" of proceeds from each sale, while photographers get a commission and the league gets a small cut. The remainder goes to Egraphs.

What's Next
Pro baseball and basketball athletes dominate Egraphs' roster, but this year Auld expanded into NASCAR and is looking for other leagues to tap. At some point he wants to add musicians to the mix. "We look at ourselves as vertical agnostic," he says. "Any place where stars might want to connect with their fans, we can be there."