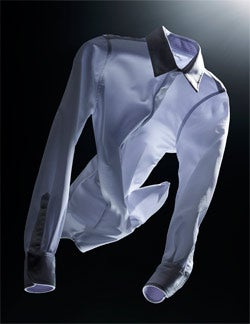 Entrepreneurs: Four students at Massachusetts Institute of Technology launched Ministry of Supply (MoS) to create stylish business clothing for men with "tech under the hood." Their wearable inventions are made of specialized fabrics that breathe, regulate heat, zap moisture and neutralize the bacteria that causes body odor.

"Aha" moment: The founders, who met at MIT's Entrepreneurship Center in 2011, were looking for better business garb. Aman Advani, in particular, was fed up with the "wrinkled, grimy" attire that comes with frequent travel. "As an active person, I knew there had to be a way to introduce performance textiles into my daily work wardrobe," he says.

One of the founders had an understanding of the machinations of body heat--how to study, map and control it--from working at the Sports Technology Institute in the U.K. Additional research led the foursome to phase-change materials, which are used by NASA to thermoregulate spacesuits.

Thermo-what? Thermoregulation is the process by which organisms maintain consistent body temperature in the face of varying external conditions. It's the reason people sweat, dogs pant and seals have blubber.

It's all about building in subtle functionality without sacrificing function.--Aman Advani, Ministry of Supply

After waging one of Kickstarter's most successful fashion campaigns--the team raised $429,000 in 2012, on a goal of just $30,000--MoS began selling its business shirts online and via a Boston showroom.

High style: Once the technology was nailed down, the MoS team looked to more utilitarian brands with modern aesthetics for inspiration. "Patagonia, Red Oxx and Tumi are influences," Advani says. "It's all about building in subtle functionality without sacrificing fashion."

The founders are striving to provide a one-stop "wardrobe solution." The company now makes $28 moisture-wicking and odor-controlling T-shirts and recently introduced $138 performance pants.

Customers: Co-founder Kit Hickey says MoS targets men who are "youthful, active and aware. Our customers are typically aged 25 to 40 and are interested in how technology can improve their life--from computers to clothing."

One goal is to offer a "personal digital experience for every shopper." In a six-month span, team members personally responded to more than 5,000 customer e-mails, all within 24 hours of receipt.

Marketing: In a show of apology, MoS sent $10 each to about 500 customers who had pre-ordered items and waited longer than promised to receive them. Advani and Hickey then jetted to New York City for Fashion Week 2012, where they discussed their company's focus on design and functionality with Elle magazine creative director Joe Zee, who said they were pioneering "the next big thing" in fashion.

Up next: A West Coast outpost or another showroom may be in the works.