An Analytics Platform That Has Mastered Sports Predictions

The age-old rivalry between jocks and geeks is finally dead--and Nik Bonaddio is the killer. Bonaddio is founder and CEO of numberFire, an analytics platform that takes sports data to new brainy levels. Combining mathematically derived metrics with advanced algorithms that factor in situational variables, numberFire turns the "unstructured and misleading data" around sports into highly accurate stats and predictions for NFL, MLB and NBA players and teams.

What this means: Your betting odds just got better, and your fantasy-sports team just dominated. In fact, the New York City-based company's official 2012 March Madness bracket correctly picked the winner (Kentucky) and finished in the top 1 percent of brackets nationwide. NumberFire claims that its data gives users a 31 percent higher chance of winning their fantasy leagues and beats the projections provided by leagues 93 percent of the time. The company has about 40,000 users.

"Fantasy sports is a really big market that's been underserved for a long time," Bonaddio says. "We're scratching the itch a lot of people have."

A two-time All-American in track and field, Bonaddio got his head in the sports-data game after joining a fraternity at Carnegie Mellon, where he studied information systems and communication design. "I realized the advice you get around fantasy football and sports in general is very qualitative. It's all, 'I think this team is going to do well,' and this never made sense to me, because sports is all about numbers--the box score, the touchdown, the yards--but no one was doing any data modeling or data analysis," he says. "I analogized it at the time to finance: When you make a trade, all the big banks are using these complex models and quantitative trading algorithms, and I didn't understand what was so different about sports." 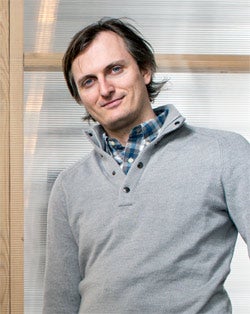 Bonaddio seems to have a knack for winning. After walking away with $100,000 from Who Wants to Be a Millionaire? in 2009, he quit his job and parlayed the cash into building data models. He launched numberFire in 2010, focusing on football insights; the site quickly secured fans by outpredicting the experts at ESPN and Yahoo 70 percent of the time by the end of the season. Bonaddio drafted Keith Goldner, an analyst for ESPN and two NFL franchises, to refine the predictive models, and last year expanded numberFire to include baseball and basketball. The startup, which continues to consistently beat the projections of CBS, NFL and Yahoo, has scored $775,000 in funding from investors including RRE Ventures and TechStars' David Tisch. Revenue--which grew from $10,000 in 2011 to $250,000 last year--is derived mainly from premium subscriptions (basic analytics are free) and partnerships with major media companies, which leverage numberFire's data on their own sites.

Turns out there really is a formula for success.

Scrubba
Scrubba is a pocket-size washing machine for camping, no electricity required: A flexible washboard in a sealable bag cleans clothes with just a bit of soap and water.

InterLock
InterLock: Keep your ride safe and sleek with this universal, integrated bicycle lock that hides inside your bike frame via the seat post.

LiveTrekker
LiveTrekker is a "lifelog" app to record photos, videos, audio and detailed maps for sharing your travels.

Moves
ProtoGeo's Moves app tracks your walking, cycling and running, turning your iPhone into a pedometer.

opendorse
Brands and athletes can use opendorse software to streamline the endorsement process with features like a matching algorithm and a transparent communication platform for deal negotiation.

DraftKings
DraftKings: Part of the "daily fantasy sports" movement; players win cash by picking a new team for each game, rather than waiting the whole season for a payoff.
loading...
More from Entrepreneur