Should You Name Drop Another Startup?

By Susan Johnston June 3, 2013
Opinions expressed by Entrepreneur contributors are their own.

Ask Brandon Bell about Integrated Adventures, his Boston-based travel discovery engine, and he's apt to describe it as a "Netflix for Adventure Travel." The 33-year-old founder uses the analogy because he says it gets listeners' attention, connects to a concept they already understand, and gauges their interest in knowing more.

If you wanted to know more, he might explain the site's Netflix-like ranking system, which is under development, and how he plans to help adventurous travelers choose their next trip based on their interests. "Any member of the team should be able to convey via email a crisp example of their value," he adds. "Netflix is a starting point for understanding this category."

As trends like movies by mail and online pinboards create buzz and entrepreneurs adapt those concepts to other industries, both startups and the media can't seem to resist making comparisons. Rent the Runway bills itself as a "Netflix of Fashion." Park Circa is a self-described as "Airbnb for Parking." Pixcited uses the phrase "Pinterest for Men." On its LinkedIn page, BloomNation calls itself the "Etsy.com for Flowers."

Related: How Entrepreneurs Push for Innovation, One pocket at a Time

But comparison marketing isn't for everyone. Some startups avoid or even deny a connection to a higher-profile company. For instance, tech bloggers often likened the now defunct Loosecubes to an "Airbnb of office space," a comparison that the startup itself avoided.

"If you're going to build something, why not make it your own?" asks Chris Guillebeau, author of The $100 Startup (Crown Business, May 2012). "Obviously you'll have competitors and comparison companies, but the most successful startups don't just do something better than the other guys or apply it in a slightly different way. They do something very different. They create their own space and then become the comparison company." 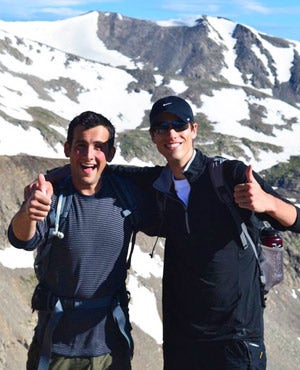 Dave Meyer (left) and CampuScene’s co-founder Ryan Schwartz (right) say the company has drawn comparisons to online networks like Facebook and Path as the functionality is similar.

Dave Meyer, the 25-year-old CEO and co-founder of Denver-based CampuScene, agrees. His Web startup, which offers virtual college tours and a free mobile app for in-person tours, has drawn comparisons to online networks like Facebook and Path because its user interface shares some of the same basic functionality. "Being compared to these inspiring companies can be flattering, but in reality they are misguided and shallow," he says. "We think our mission and what we're trying to accomplish is very different from those companies."

Meyer points out that consumer-oriented internet companies typically focus on revenue and usage. "We absolutely need those things to function as a business, but as an EdTech company, we hold ourselves to a set of standards that are different," he says. "Our goal is getting students into the right college for them."

Meyer acknowledges that, "It can be complicated to hone your elevator pitch to get people to understand your concept in a few short words." But he manages to focus on CampuScene's distinctive attributes by steering the conversation away from its Facebook-like interface and back to its goals. "Usually, we try to create a narrative about a potential user and tell a story about how they would use our tool," he says. 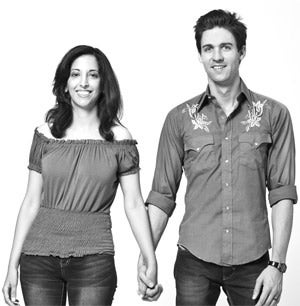 Some compare BrideRush and EventRush, the two companies founded by Anita Malik and James Miller, to deals site Groupon. They want you to think Priceline.com instead.

Some entrepreneurs, including Anita Malik, 36, and James Miller, 29, don't oppose comparisons -- as long as they're accurate. Malik and Miller founded Phoenix-based BrideRush and EventRush, offering date-specific deals on wedding and event vendors, and they often draw comparisons to Groupon, which they consider off base. "We are not one of those Groupon clones," Malik says. "We're specific to our industry. We provide the missing information that deal sites don't have. We're more of a booking solution than a deal site."

Miller also points out that comparisons to another startup can invoke negative associations. He has found that while customers like daily deals, some vendors can be wary of Groupon and its clones "because of this negative connotation that Groupon is reaching into the pockets of small businesses and killing the business."

Related: Caterina Fake's Findery Aims to Be an 'Adventure Machine'

But BrideRush's husband and wife team do see some advantages to comparison marketing and often liken the site to Priceline. "People seem to get that better because of the date-specific aspect," Malik says. "Pricing can vary based on your dates. We found that [mentioning Priceline] was the best way to get people to understand what we're doing, and then we can start to build out how we're different."

What do you think about making similar comparisons? Let us know your thoughts with a comment.