Amid Istanbul Protests, Caution at a Conference

Diana Ransom
June 4, 2013 6 min read
Opinions expressed by Entrepreneur contributors are their own.

Want to know how a society -- in the developing world especially -- really ticks? Ask the women.

From Nairobi to New Guinea, women have long served as the family's primary caretaker -- cooking, cleaning and supplies gathering. They're also increasingly the family's breadwinner. It's a sad fact that in war-torn or impoverished parts of the world, men are often forced to either pick up arms or earn money in remote locations, away from their families -- leaving women to look after children and the household.

Last year, entrepreneurship activity among men and women was almost equal in most sub-Saharan Africa economies, according to the latest Global Entrepreneurship Monitor survey. In Ecuador, Panama, Ghana, Nigeria and Thailand, the rate of entrepreneurship among females was higher than that for males.

Women entrepreneurs have benefited, in part, by the rise of microfinance. That access to capital -- even at high rates of interest -- is credited with helping women either start or expand a microenterprise and, by extension, more sustainably provide for their families.

In time, these businesses may grow beyond their "micro" label. They may scale up and create thousands, if not millions, of jobs. The potential is thrilling.

Next: A Dispatch From Istanbul

When traveling to the ancient, metropolitan city of Istanbul for a business conference the last thing you have in mind is fending off protesters and renegotiating trip plans. But that's the predicament of the more than 150 attendees at this year's Dell Women's Entrepreneurship Network event.

Entrepreneurs from 14 countries including the U.S., U.K., New Zealand, India and China gathered this week for the annual conference on women's empowerment and entrepreneurship. The largest city in Turkey also played host to a series of tumultuous anti-government protests.

From bailing on hotel accommodations to canceling tours, many attendees were stymied by the protests. At least two people have been killed in the demonstrations, which began May 28 in Taksim Square's Gezi Park and have extended into several cities throughout Turkey.

A number of attendees who had planned to stay in Istanbul past the end of the conference Tuesday rearranged tour schedules and hotel accommodations. The protests are expected to continue into Wednesday and maybe through the week. Other attendees staying in hotels and Airbnb rentals just off Taksim Square and Gezi Park were relocated by conference organizers.

"Once [Dell] confirmed where we were, they picked us up," says Simone Ross, the chief operating officer and chief program officer at Techonomy Media, the New York-based technology-focused conference and media company. From her room at the Divan Hotel just off Gezi Park, Ross says she could see hordes of protesters and was exposed to peripheral levels of tear gas. In the lobby, she witnessed protesters ducking for cover as they sought protection in the hotel, as tear-gas canisters exploded outside.

"I didn't fear for my safety, but given a couple of considerations, realized that it probably would not be wise to return if I didn't have to," says Ross.

Celia Gates wasn't so lucky. The founder of the Global Brainstorm, a U.K.-based collaborative brainstorming system, was scheduled to speak at the conference. On Friday, two days before it started, she reported having tear gas fired at her in Taksim Square. "My conference started with a bang," says Gates, who was unharmed.

Protests were sparked by plans to replace Gezi Park, which houses an Ottoman-era army barracks replica and serves as one of the few green spaces in all of Istanbul, with a shopping mall. Since then, the protests have expanded not only into other Turkish cities, protesters have widened their target to include Turkey's government, led by Prime Minister Recep Tayyip Erdogan. Specifically, they're unhappy with Erdogan's perceived heavy-handed tactics and the increased influence of religion within his party and the government. 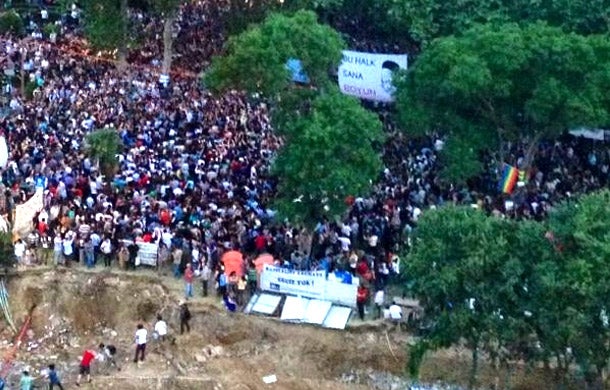 Scenes from Gezi Park, where demonstrations began as a response to plans to replace the park with a shopping mall.
Image credit: Simone Ross

Though protests have largely been peaceful, the crackdowns have been swift and often violent and have included the use of water cannons and tear gas.

At the Dell event, many of the Turkish attendees including Leyla Alaton of Alarko Holding and Melek Pulatkonak, the founder of business-networking group the Turkish Women's International Network, expressed pride in Turkey's people for being vocal about their beliefs. Others noted that the protest is almost a year from the day of when Turkish women took to the streets to protest limitations on reproductive rights.

Ahu Serter, a Turkish entrepreneur and investor, beamed with pride, as she discussed printing wearable stickers or decals that offered support to the protesters. She plans to give them away. "I see it as my duty to support this cause," says Serter. "I want the world to meet the new Turks, so I am funding it myself and distributing [the stickers] to anyone who wants to wear them." 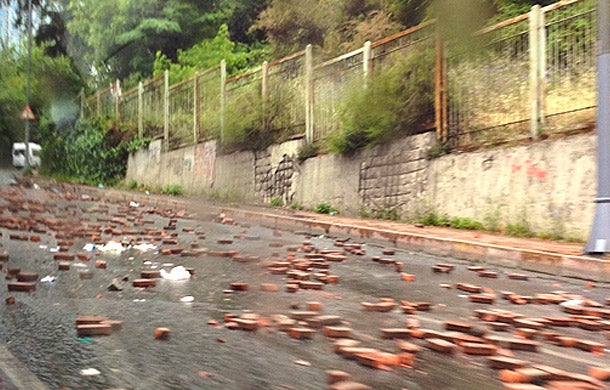 Serter says that while she didn't vote for Prime Minister Erdogan, she respects him and his business-improvement efforts. "What he has done to transform Turkey in the past 13 years is amazing, and as a business owner I applaud him," she says. "I only want him to acknowledge and respect the people of Turkey, just as they do him."

Overall, the mood at the Dell event is one of caution. "We're going to hire professional tour guides for when we go sightseeing now," says Ingrid Vanderveldt, a business owner and Dell's entrepreneur in residence.

The conference is being held at the Grand Tarabya, a luxury hotel 10 miles from Taksim Square. Protests have also touched the locale, an old fishing village, which Turks traditionally visited for the sea water's therapeutic qualities. Protesters have taken to the streets mulitple times this week, blocking traffic, banging pots and chanting.

Additionally, a scheduled conference excursion to Istanbul's famed Grand Bazaar was canceled just hours before departure due to security concerns.

"Security is of utmost importance at all Dell events and appropriate measures are taken to ensure safety for all attendees at any Dell event," says Dell spokeswoman Jillian Fisher, who added that both Dell’s head of global security and its head of security for Europe, the Middle East and Africa are both in attendance.

The possibility of events -- like those occurring in the past few days in Istanbul -- are always a consideration in hosting the annual women's event, says JJ Davis, a Dell spokeswoman. "When you hold an event in an emerging market like Turkey, this is the risk you take."