Fitness Startups Put Their Own Spin on Indoor Cycling

By Katie Little July 1, 2013
This story originally appeared on CNBC

A decade ago, indoor cycling was pretty much relegated to a sweaty, crowded room at the local big-box gym.

This fitness trend has grown quickly, though, fueled by the expansion of boutique chains such as SoulCycle and Flywheel Sports.

Blending spin classes and motivational coaching, SoulCycle opened in 2006. One of its three co-founders later left and launched Flywheel, which offers a more competitive atmosphere, in 2010. People often refer to indoor cycling as "spinning," but the companies typically avoid using that trademarked term.

Given the success of boutique cycling studios, several fitness startups are putting their own spin on the concept, hoping to grab a slice of the growing industry.

Stephen Nitkin's idea for a boutique cycling company was born out of frustration with securing spots in his favorite New York fitness classes, including indoor cycling, yoga and boot-camp.

"The conversation started when we realized that over Christmas it was very difficult to get into the classes we liked," said the founder and CEO of CYC Fitness. Nitkin was also ready for a new role after more than a decade at Marquis Jet, which he co-founded and later sold to Berkshire Hathaway's NetJets.

"We thought it would be interesting to bring this to the college market, where there are young professionals, too," he said.

With funding from a small group of investors, Nitkin opened CYC Fitness's first two locations last year, in Austin, Texas, and Madison, Wis. The cities were chosen because of their fitness emphasis and progressive feel, he said. The company has raised about $3 million and plans at least two more locations, with one in the New York University area.

To differentiate his company, Nitkin offers customers something lacking during his own college days at the University of Maryland: a healthy alternative to the bar scene. At CYC FItness, he said, "you can meet someone with similar interests."

Its pricing is also geared toward the college crowd. At $15 to $20, CYC's classes are well below the roughly $30 and up charged by many boutique cycling spots.

Overall, hefty entry fees per class help such studios offset expenses that include high rents in large metro areas, bikes that can cost more than $1,000 each, and extensive plumbing and HVAC renovations often required to keep cyclists cool during difficult workouts.

Another competitor is AQUA, which features stationary bicycles submerged in a four-feet-deep pool, which is shallow enough that a cyclist's upper body stays dry.

Founder Esther Gauthier got the idea for the business in Paris, where she tried aqua cycling -- the classes are popular in Europe -- and was instantly hooked. She left her job as a fashion photography producer and opened her own studio in Manhattan's TriBeCa neighborhood in April.

The concept appeals to some exercisers with joint pain and provides "all of the benefits of swimming without the disadvantages of getting your hair wet," Gauthier said. Some longtime cyclists suffer from knee problems.

"They've been doing regular spinning for years, and they were really addicted to it, and they had knee injuries," she said. "So they came to us, and they found a compromise where they can still get their cardio but also protect their joints." 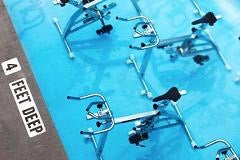 The company is funded by one private investor who does not want to be identified. While there's only one location now, Gauthier said she wants to open more outposts in New York or Los Angeles. She also hopes to expand to related businesses, such as a juice bar and retail apparel, including swimsuits.

But with startups and with the rapid growth of established players like SoulCycle and Flywheel Sports, could the market be reaching a saturation point?

"I don't think there are too many at this point," said Ruth Zukerman, co-founder of Flywheel Sports and one of the co-founders of New York-based SoulCycle. "I think there's room for everyone right now." SoulCycle combines inspirational coaching and high-energy workouts.

Flywheel, also based in New York, has 23 studios and plans to open seven more in the fall. The company does not disclose the amount of funding it has raised from investors, including CoachCEO and Chairman Lew Frankfort and Jillian Michaels, a fitness trainer best known for her role on NBC's The Biggest Loser. Classes also incorporate upper-body strength training with hand weights.

New York-based Revolve joined the market in December 2011 and has two locations, with classes ranging from traditional cycling to a more challenging "rip ride" for hardcore fitness fans.

Sylvan Garfunkel, Revolve's president, said that despite new entrants, he doesn't view cycling as a fad, likening its growth and staying power to that of yoga.

"I would agree that we're seeing more and more people enter the market," he said. "Ten years ago, there weren't all these stand-alone yoga studios either, and now here we are 10 years later and you see one on every corner."