By Sarah Max July 8, 2013
Opinions expressed by Entrepreneur contributors are their own.

When Crocs, Inc. made its stock market debut at $21 a share in 2006 – just four years after it began selling the colorful foam clogs – skeptics figured it was only a matter of time before the company stumbled. True, the comfortable slip-ons were widely embraced by everyone from parents of preschoolers to medical professionals. But at some point, they said, the fad would go down in flames.

Despite the naysayers and the knockoffs, sales continued to grow through the following year, peaking at $847 million in 2007.

Just a year later, the recession hit Crocs hard. "Our business model was that retailers didn’t have to pre-book their product,” says Crocs chief executive officer John McCarvel, who was heading up Asian operations for the Niwot, Colo.-based company at the time. Instead, Crocs based production on forecasts. When sales dipped, the young company was not only left holding a surplus of product, it didn’t have a good grasp of how much inventory its retailers had. 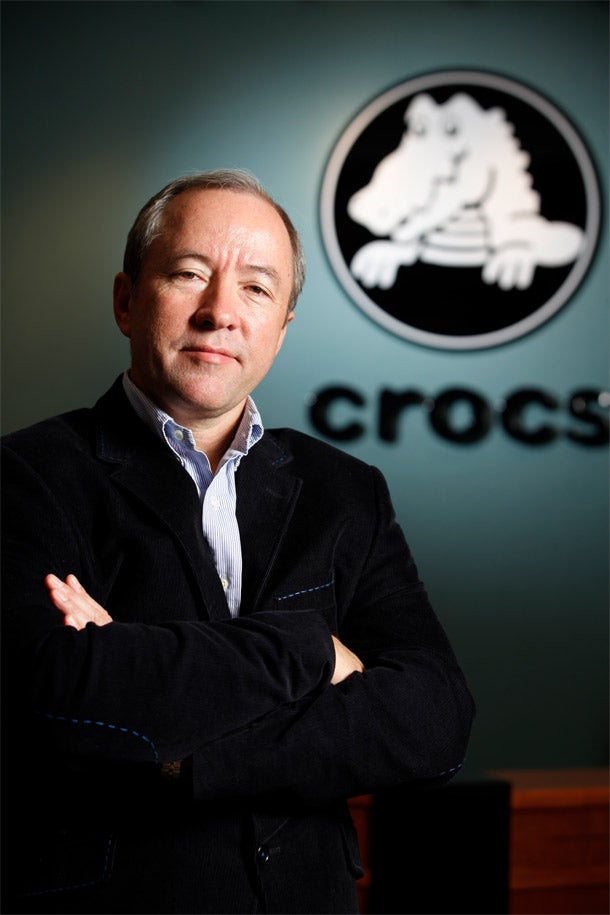 "All of a sudden 2008 hits and not only are retailers not taking new products, they’re cutting back inventory and the economy is slowing down at a very rapid pace," he says. In 2009, revenue plummeted to $646 million and the stock dipped to $1 a share.

Despite its near-death experience, Crocs lives on today. It’s now a billion-dollar company with a new spring in its step. That October, shares in CROX climbed to $75.

The company has expanded its product line to include more than 300 designs in the $25 to $60 price range, from flats and wedges to furry boots and golf shoes. Today, clogs account for less than half of all sales. It’s improved its supply-chain management and revamped its retail strategy; direct-to-consumer sales account for 43% of its business. At the same time, it’s continued to expand globally, with U.S. market now representing less than a third of sales.

From the outside, the transformation appears dramatic. In reality, it was years in the making, says McCarvel, who was named CEO in 2010.

"From the beginning we knew that having an iconic clog was a true blessing, but we also knew we had to innovate," he says. In 2006, the company bought a small operation in Italy in order to up its fashion game; the group focuses on product design and material development. While diversification is a priority, the company incorporates its trademarked Croslite resin material, which is soft, lightweight and odor-resistant, into all of its designs. "You can do a lot of things with it," says McCarvel. Still, the company was initially so focused on keeping up with demand for its ubiquitous clogs, he says, it didn’t innovate as quickly as it probably should have.

Prior to the recession, the company relied primarily on retailers to sell its shoes and let the product get over distributed. It was everywhere from Nordstrom to Hallmark stores. Today, Crocs works with a select group of mid-tier shoe retailers, including DSW and Famous Footwear, and sells through its own retail outlets and ecommerce site. The approach helps Crocs control inventory to better prevent surpluses.

Steve Moore, a partner with Los Angeles private equity firm Brentwood Associates, counts himself among Crocs' early skeptics. "Given how fast it was growing on a single look, you could see the boom and bust," says Moore, whose firm specializes in buying consumer companies with strong brand loyalty.

Now, he says, "they've definitely proved us wrong." He says that Crocs has done an impressive job growing beyond their core product while not straying too far from what made them successful in the first place.

Entrepreneurs need to "always be thinking about what's next," he says, but there's a fine line between diversification and dilution. By all means explore new products or distribution channels, he says "but know when it's time to cut bait if an idea isn't panning out."

While the Crocs brand suffered during the recession, much of this was contained in the U.S. market. "Business in Asia never slowed down and Europe went along at good pace," says McCarvel. "But our U.S. business was so large relative to the rest of the world." Now, he adds, "we have more balance globally."

Crocs isn’t the only consumer company to see these kinds of ups and downs, and growing pains. "A lot of brands that have emerged over the last years that went from nothing to mainstays have gone through that same dynamic," says McCarvel.

For entrepreneurs running these overnight sensations, however, it’s a tough balance between getting all the benefits of that growth, including brand recognition and getting in with value retailers, while taking steps to make sure it’s sustainable over the long run.

"When you see an opportunity in front of you, you want to maximize your position," says McCarvel. "Did it overextend us? Maybe in certain aspects it did. But some of those things were eventually to our benefit."