Tanna Marino and husband Michael, a Houston firefighter, had always been technically inclined. When their refrigerator broke, they pinpointed the problem to the compressor but weren't confident enough to replace the unit themselves. Instead, they called in a technician from the local Mr. Appliance franchise. "We really hit it off," remembers Tanna, who had spent the previous five years as a stay-at-home mom. "By the end of the visit, he was recruiting Michael to join the business."

Michael wasn't interested, but Tanna was--she applied and began training as a Mr. Appliance technician. A few years later, in 2011, she was approached by a reality-TV producer who wanted a contestant to shadow her and learn her job. Tanna agreed, and for two days last year she unwittingly escorted Dina Dwyer-Owens, chair and CEO of Mr. Appliance parent company The Dwyer Group, as part of the CBS show Undercover Boss.

Dwyer-Owens was so impressed with Marino's customer service and attitude that she offered her a job at corporate headquarters. Now Marino is a franchise consultant and head of the Women in the Trades initiative, which recruits women into the company's seven franchise brands. We talked to Marino about the challenges of being a female technician, how she's getting women into tool belts and how being a minor celebrity has changed her life. 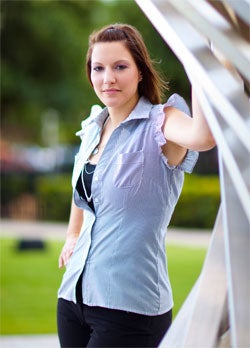 What are the difficulties of being a female repair tech?
I did get some resistance. Since I was a younger female--I'm 34 now--people would see me getting out of the Mr. Appliance truck and look at me cross-eyed. I even doubted myself. When I was still learning the job I had to learn to have confidence in myself, even when customers lacked confidence in me. I just fixed one machine at a time, and felt stronger after each one. There is a lot of personal gratification and self-esteem when you fix a machine and a doubting customer says, "Thank you." A positive attitude and drive get you a long way.

What does your work with Women in the Trades involve?
My job is to help attract women to our service brands. I speak to women about our concepts and interact with them on social media. We also have six training scholarships of $1,500 each to help women with training.

It has been difficult getting women interested. I don't know if they are scared or unsure, but there's a lot of hesitation. The Dwyer Group has been trying to get more women into its concepts for years, and the biggest challenge is just getting the info out there. Service jobs are not really male-oriented; women can do them just as efficiently. In fact, they have a different set of skills--they are usually more detail- and customer-focused. And many women are more comfortable having a female technician in their home rather than a strange man.

How did being on TV change your job?
It's weird--the morning after Undercover Boss aired, I was in my truck running calls when a lady at a stoplight waved at me frantically. I thought, What is going on? I was also buying bananas at Walmart when two gentlemen stopped me. It's weird being recognized by strangers. But now we prepare for it. Every time that episode re-airs, our PR team is ready, and we use it to generate leads on LinkedIn and other social media.

Do you still fix your own appliances?
I actually don't. I have a new home, and I'll void the warranty on the machines if I fix them myself! But my mother-in-law and family call me. I'll probably always get that. I don't mind passing on what I've learned.