How Social Media Can Boost a Shop's Pet Projects

By Wensdy Von Buskirk August 1, 2013
Opinions expressed by Entrepreneur contributors are their own.

Los Angeles-based SPOT! opened in 2006 and moved to its current 4,000-square-foot location in 2009 to accommodate growth. With approximately 20 employees, SPOT operates a one-stop-shop for pets, with grooming, daycare, veterinary services and retail selections. From the same location, the company also runs Saving SPOT, a non-profit established in 2009 and dedicated to the rescue, rehabilitation and placement of dogs from shelters in greater L.A.

According to rescue manager Ruby Siering, who doubles as the company's social-media manager, SPOT's location helped organically bring about several celebrity endorsements that have raised the organization's profile. A new foray into Instagram, the perfect platform for photos of adorable dogs, upped Facebook likes by 500 and Twitter followers by 200 in just two weeks. Still, Siering says, SPOT struggles with building a local audience that can visit the brick-and-mortar location and actually adopt a dog, or use services and purchase products which allow the nonprofit to continue its rescue mission. Experts believe its social-media efforts aren't telling the business's full story.

What's working
Making the most of its luck. Ellen Degeneres has mentioned SPOT on her daytime talk show and often shares photos of rescue dogs. Last month, Twilight star Ashley Greene Tweeted about adopting two puppies from SPOT after her dog died in a highly-publicized apartment fire. Singer Miley Cyrus also is a fan. The endorsements have helped SPOT attract more than 3,400 Facebook fans and 7,100 Twitter followers from around the world. SPOT makes sure to retweet and favorite celeb postings and now works with a social-media team at Ellen to send photos of adoptable pets for her website every two weeks. 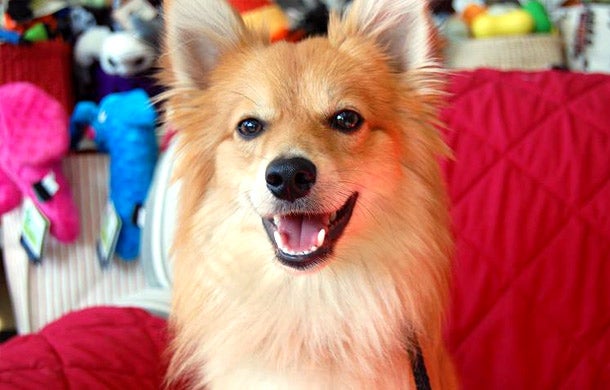 Separating retail efforts from its non-profit efforts in social media can help the company build traffic to the business that supports dog rescues.
Image credit: SPOT!

According to Ric Dragon, author of Social Marketology and founder of Dragon Search, a digital marketing company based in New York, that type of publicity is extremely valuable. "Many companies try to buy those types of endorsements and they're very expensive," Dragon says. Being in the heart of L.A. makes SPOT visible to celebrities and its mission has spread through the Hollywood set, according to Siering, but Dragon says all businesses can benefit from word of mouth through social media. "Maybe you're not able to get celebrity endorsements, but those people who are your biggest fans are still apt to have their own social networks. It's important to ask them to share your message," he says. Create posts they can share, and if you are fortunate enough to be one degree of separation away from a celeb or high-profile person, be considerate of their time and ask to connect with their social-media manager so you can ask them to lend support to your social-media cause, he suggests.

Projecting passion points. SPOT's Twitter and Facebook feeds focus solely on its rescue efforts, a topic that many animal lovers are likely to support and appreciate. Lorrie Thomas Ross, founder and CEO of Santa Barbara, Calif.-based Web Marketing Therapy, says the company does a great job of avoiding a hard sell. "They don't push products. I give them two thumbs up for that," she says. Dragon agrees and says businesses can learn something from the non-profit world, adding that some of the most successful businesses on social media have adopted some sort of 'passion point,' or non-promotional element that connects them to the community.

What experts advise
Be direct. While altruism is great, SPOT is still a business. Not all animal lovers can adopt a dog, but they might have an ongoing need for a one-stop shop that offers grooming, supplies and veterinary services. Dragon recommends creating a separate social-media profile to promote the for-profit SPOT arm, that can share posts from the non-profit's profile, noting that "a non-profit that is advertising their for-profit activities might lose some credibility." On Facebook, Ross suggests enlisting a graphic artist to add text to the cover image explaining what SPOT offers and where the business is located so visitors don't need to click or scroll to find out. These services should also be spelled out clearly in the "About" page on the for-profit arm's profile. Ross, a self-proclaimed "marketing therapist," adds, "We can still have values and pay the bills."

Expand your network and engage. While SPOT has more than 7,100 Twitter followers, it follows less than 90 people. Dragon suggests strategically following nearby animal lovers, dog walkers, dog bakeries and dog parks within certain zip codes, creating lists, and using tools like TweetDeck or Sprout Social to monitor its account. Dragon says the shop shouldn't miss opportunities to reach out to fans who already are interested in its business. "The act of following people is a little gift, a handshake," he says. "It can be very powerful." Ross says it's important to increase engagement by increasing posting frequency, and offering educational pet-care tips from vets and other in-house experts. He says SPOT can play on the popularity of online pet photos by posting snapshots of dogs at day camp or after grooming sessions and tagging their owners. And every time SPOT posts dogs up for adoption, the company should link to the rescue page of its website to make it easy for people to act on the business' core mission -- finding dogs "forever homes."