Shradha Agarwal and Rishi Shah were writing an article on out-of-home media for their university's business magazine in 2006 when it dawned on them: This would make a great business. TV screens had become de rigueur in taxicabs, shopping malls and high-rise elevators. But the Northwestern University undergrads saw an untapped opportunity to bring multimedia content to a more targeted audience: patients in waiting rooms.

"My grandmother passed away young from diabetes complications," Agarwal says. "Rishi's father is a diabetes specialist. We saw how small bits of information at the right time and place can make a huge impact."

Their idea was to sell doctors' offices prepackaged video segments containing tips on diet, exercise and other lifestyle tweaks patients could make to improve their health. A TV screen in the reception area would broadcast this programming, modeled after segments on shows such as Today, while patients waited for appointments.

To test the idea, Agarwal, Shah and classmate Derek Moeller bought TVs and DVD players, culled content from the internet and distributed the equipment and "shows" to 50 doctors in five states.

The feedback? "This is great. We love it. The information is so useful," Agarwal recalls doctors saying. Patients were sold, too. They appreciated the suggestions, and the videos were helping them ask their MDs better questions. There was only one hitch: Because insurance companies don't reimburse patient education, the physicians had no budget for the service. In other words, no sale. 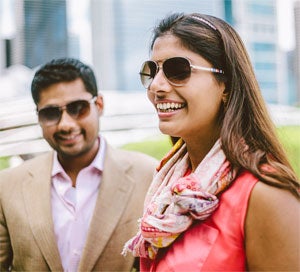 After considering, then nixing, the nonprofit route, the 'treps decided to offer content free of charge to healthcare professionals and to sell advertisements that would air between segments. Shah and Moeller dropped out of college to launch ContextMedia in Chicago, with investment from family and friends. Agarwal joined her co-founders full-time in 2008 after graduating from Northwestern ahead of schedule. (Moeller left the company in 2009.)

Because it's what they knew best, they started with diabetes. To obtain quality one- to five-minute edutainment videos, they partnered with health-content creators such as the diabetes platform dLife. "Commercial breaks," which last 15 to 120 seconds, make up 25 percent of the content ContextMedia streams into waiting rooms. Among the company's advertisers: health-food companies, gyms, retailers, pharmaceutical companies and makers of medical devices.

ContextMedia became profitable its second year in business. Revenue has grown 100 percent year over year since 2010; the company is on track to clear $10 million in EBITDA this year. ContextMedia's videos reach 50 million U.S. patients a year and serve 4,000 hospitals, private practices and other medical waiting rooms, including those at Yale, Stanford, Johns Hopkins, Northwestern and Harvard. The company employs 45 people, including five in its New York office, which opened in 2011. 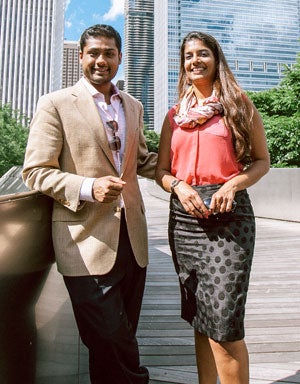 Agarwal, now 28, is chief strategy officer. She credits ContextMedia's success with the variety and specificity of its library, which contains thousands of videos. The company has content for cardiology, rheumatology, neurology and urology patients and targets the videos streamed to each office based on patient income, ethnicity and medical literacy. "It's always relevant, and patients aren't watching the same thing over and over," she says.

But Agarwal and CEO Shah, 27, aren't satisfied just building a health-media empire. They want to help others succeed, too. Using their personal savings, they started angel investment fund JumpStart Ventures in November 2011. To date, JumpStart has invested more than $1 million in 19 startups working to solve U.S. health and education problems.

"Companies in healthcare and education really struggle to catch the attention of venture capitalists because they're not very sexy industries to be in," Agarwal says. "So we decided, where better to put our fund than to help other entrepreneurs build their businesses?"