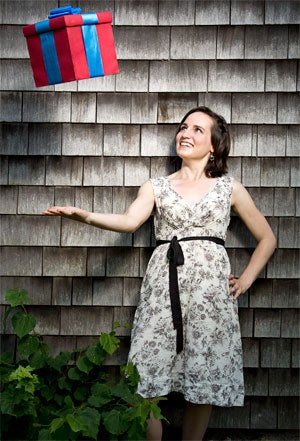 When Jessica Streitmater was attending the University of New Hampshire, her mom would send care packages of goodies with notes tucked inside as a pick-me-up during finals. "It was such a great day to get a care package in my mailbox and open it up and see all the little surprises," she recalls.

The business management and entrepreneurship major decided to apply modern technology to the old-fashioned concept. With some classmates, she started Regaalo, a web service that allows parents to send gifts to students.

As underclassmen in 2011, Streitmater, now 24, and Matthew Robinson, 26, along with four other students (no longer with the company) entered a business-plan competition with their idea and took second place, earning them $5,000 in funding to launch the business.

Regaalo (a take on the Spanish word for gift) partnered with merchants around the UNH campus in Portsmouth to offer products ranging from pizza to massages; the company now has a total of 45 partners in New England. Orders are placed at Regaalo.com, and notification of the gift--along with a code to redeem it--is sent to students via text message. "Parents loved the idea," Streitmater says.

Regaalo collects a 20 percent fee from the merchant when a gift is redeemed. (The average purchase is $30.) To date, the business has generated revenue of $16,000.

Creative marketing may help bring that number higher. In addition to marketing the service to parents at freshman orientations, Streitmater and Robinson struck a deal with UNH last year in which the school agreed to send an e-mail blast to its entire mailing list promoting a care package for finals, in exchange for a donation totaling 10 percent of sales. The e-mail campaign generated $6,000 in revenue.

Sales may be small so far, but the company's potential has not escaped notice--Streitmater and Robinson have raised $200,000 from private investors, including Anne Decker, who learned of Regaalo through an acquaintance at UNH and invested an undisclosed sum in exchange for equity.

"I liked the fact that [Regaalo] created a niche in the local market," Decker explains.

"This is going to be more than a local business; their vision is a national vision, and they are willing to do the groundwork to make it successful."

That's already starting to happen. Last year Regaalo expanded into Boston, hoping to take advantage of the high concentration of colleges there. The company partnered with merchants in the area, giving parents a chance to send students gift certificates for meals and services.

Regaalo has also launched a service for customizable gift baskets; they can be filled with snacks, school supplies and clothing with school logos and sent to students anywhere in the U.S. The baskets are assembled in the Regaalo offices in downtown Portsmouth.

While growth is paramount, Streitmater remains committed to customer service. During a 2012 snowstorm that closed the UNH campus, including the dining hall, a concerned parent called

Regaalo to see if they could get some soup to his daughter. Despite the inclement weather, Streitmater was quick to coordinate the delivery. "In a startup, you have to do everything from marketing and bookkeeping to making deliveries," she says. "It's worth it to keep our customers happy."