How a Franchise Owner Made Fast Food Local 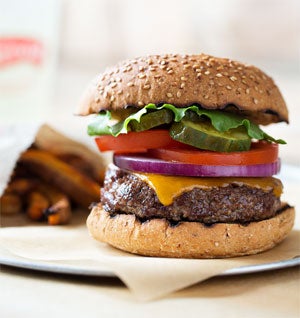 Sometimes simple food is the best. Two friends from Boston, Anthony Ackil and Jon Olinto, were lucky as kids to have home-cooked meals from Ackil's uncle. "Jon and I grew up together, and both of my parents worked," Ackil says. "So every day after school or practice, my uncle would cook these really simple, delicious meals for us. Like these really great burgers."

When the two decided to start a business, they couldn't stop thinking about that home-cooked food. They knew that if they could deliver something similar to customers in a fast, convenient form, they'd have a hit. So they began researching ways to bring healthy fast food to market. They opened their first b.good in 2004.

"We have tried to perfect everything, from the way we cut tomatoes and source beef to how we hire people," Ackil explains. "It took nine years, and we opened 12 stores around Boston, working tirelessly to figure out how to time things out, the financials and how to position our brand. That's why we only started selling franchises a year ago."

One thing the b.good team had to figure out (something analysts once said was impossible) was a way to use locally sourced, seasonal ingredients in a fast-food franchise--and not just as a garnish. All b.good's beef and produce is local. Sauces and dressings are made from scratch. In addition to hamburgers, the menu includes turkey and veggie burgers, a chicken sandwich, four types of salads, fries, crisp veggies, milkshakes and smoothies.

Now with stores in Connecticut, Maine, New Jersey and North Carolina, b.good is proving that real food can work. The company aims to open 50 stores on the East Coast by 2015, before expanding nationally.

Ackil talked to us about how he hopes to become the Whole Foods of fast food.

Is b.good more expensive than regular fast food?
No. The reason our costs aren't higher is that we buy whole ingredients--whole potatoes are cheaper; we buy whole meat and grind it. The trick is to get our labor costs in line, since we do more prep. But the prep is low because our menu is tight and small.

When we started we did things like time out how long it takes to cut 5 pounds of carrots. We had time to be flexible and test things. That was really important--we didn't have the pressure to sell franchises right away. Jon and I worked the line for four years, learning every aspect of the business.

Isn't it difficult to source local ingredients?
When we opened, neither of us had worked in a restaurant before, so we looked at things through a different lens. Even now, after nine years, people write articles about us saying that farm-to-table won't work in fast food. We think anything is possible, and we know local sourcing can 100 percent work. Finding local partners is easy, and store economics can be better than OK--they can be best in class. We've proved that dealing with a local supply chain can be pretty easy if you do it right.

Do menus vary by location?
We're flexible. Up in Boston it's blueberry season, so that will be in our smoothies there. We'll have a peach smoothie in Georgia when they're in season. But when you get down to it, the number of local products is kept tight. We're not trying to source 90 things. There's been such a huge movement toward local produce that it's easy to find produce vendors, beef producers and cheese- and dairy-makers. The whole thing is about having good relationships and bringing those products into broadline distribution.

Any big mistakes?
When we started out we thought our menu had to be huge. We had pita chips and dip, beans and rice, brownies, all kinds of crazy stuff. We were roasting whole turkeys every morning and doing steak-tip dinners. We took about 50 percent of the items off our menu, and we got better at what we were doing, and our economics really improved.

Do you think McDonald's will ever go farm-to-table?
I think we have a different demographic, but I also think fast food is going to change. We are one of the visions of what fast food should be. People are thinking more about where their food comes from and how it is sourced. At the same time, the food has to taste great. People have to feel really good about what goes into their body. This is not a fad; it's always going to be there, but it's going to continue to evolve.