By Shayna Meliker October 4, 2013
Opinions expressed by Entrepreneur contributors are their own.

As Congress squabbles up on Capitol Hill, businesses in Washington typically fed by federal employees are experiencing their own spending crisis -- namely, a lack of it.

The government shutdown, now swelling into its fourth day, has kept 800,000 furloughed workers out of the city's coffee shops, restaurants and retail stores. And yesterday's shooting, which left one woman dead and a Capitol Police officer injured, adds a second element of trouble.

The incident outside the Hart Senate Office Building seems to have scared away some of the region's tourists, who typically spend money on things like walking tours and souvenirs -- in spite of the shutdown's forced closure of tourist hotspots like the Smithsonian museums and national monuments.

"This has just been horrible," says Andrew Gallagher, general manager and business manager of White House Gifts, a gift shop with two locations in Northwest Washington and one just a stone's throw from the White House. "It's very clear that it has absolutely had an impact."

Gallagher has already seen a 40-percent drop in business, and it's not just from the events of this week. The decline started back when the Washington Monument closed to tourists, and then the sequester halted public tours of the White House. Add to that list the Navy Yard shooting, the government shutdown and now the Capitol Hill shooting, Gallagher says, and he expects business to get even worse. 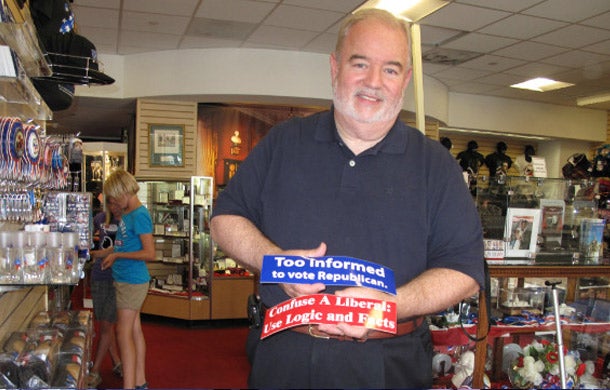 Andrew Gallagher of White House Gifts says sales have fallen 40 percent, as tourism has fallen off due to strife on Capitol Hill and a string of area shootings.
Image credit: CNNRadio

"You've got this pall hanging over the town that's scared people," he says.

It's a pall that's also hanging over the food trucks gathered at Farragut Square on an otherwise sunny day, serving an obviously deflated lunch crowd.

Sandra Panetta, owner of the pink Sweetbites cupcake truck, is logging just half her normal traffic. She's had to skip what are typically profitable stops near the State Department, Department of Education and Federal Aviation Administration.

"Long term, it means bills are going to be paid late, mortgage companies need to be called," she says. "It's not our fault. It's not under our control, and it's pretty darn ridiculous."

President Barack Obama harped on this exact issue during his visit yesterday to the M. Luis Construction Co., in nearby Rockville, Md.

"Now we've all seen the offices locked down, the monuments closed. We've heard about services denied, we've heard of benefits that are delayed. But the impacts of the shutdown go way beyond those things that you're seeing on television," he said. "Those hundreds of thousands of Americans, a lot of whom live around here, don't know when they're going to get their next paycheck. And that means stores and restaurants around here don't know if they'll have as many customers."

In an effort to stave off that problem, some local businesses have discovered ways to appeal to furloughed-government employees who find themselves with more time, if not more money, on their hands. The wave of a government ID can buy you free gym classes, happy-hour specials and even complimentary popcorn and soda at the movies.

Willow Street Yoga Center has seen a huge influx of government employees coming in for half-priced drop-in classes at its locations in Takoma Park and Silver Spring, Md.

"Yoga is somewhere between a necessity and a luxury item in a time like this," says co-owner Natalie Miller. She estimates that a quarter of her clients are federal employees, and that they're showing up in much larger numbers for daytime and even evening classes.

But Z-Burger, a popular fast-food chain with six D.C.-area locations, should serve as a cautionary tale for companies catering to the furloughed crowd. On Tuesday, owner Peter Tabibian announced that four of his locations would offer free burgers to federal workers. "A nice thing to make things a little bit easier on them,'" he called it.

Just days into the promotion, things started getting out of hand. Lines out the door grew to 200 customers deep. Tabibian estimates that between the promotion's start on Monday and end on Thursday, he handed out 16,800 burgers -- the equivalent of around $89,000 in lost revenue.

"My employees were getting burned out and they were threatening to quit," he says. "I really didn't want to call it off, but there is no way I could stay in business if I did it one more day."

Still, Tabibian says his doors are open to any Congresspeople who want to solve the shutdown over some burgers.

"Maybe they can have some good food and fix this right away."

Shayna Meliker is a journalist born and raised in the Washington, D.C. area. She's an editor at Vetstreet.com, and has been published by USA Today, The Baltimore Sun and the Chicago Tribune.