By Dinah Wisenberg Brin May 12, 2012
Opinions expressed by Entrepreneur contributors are their own.

Giving Mom a big 'Thank you' on Mother's Day is always a sweet idea. But for the 28-year-old fitness trainer and author Dustin Maher, he should show his appreciation every day of the year. After all, Maher's mom inspired his business, a mini empire focused on getting moms in shape and helping them connect with each other.

Maher, of Madison, Wis., has big plans for his business, which currently includes local MamaTone fitness classes, outdoor Fit Fun Bootcamps at 11 sites, his Fit Moms for Life: How to Have Endless Energy to Outplay Your Kids book and a workout-DVD subscription service.

Maher says his business has 300 to 400 active "bootcampers" at any time, 200 to 300 in the monthly DVD subscription program, and has sold more than 10,000 DVDs. The $39 monthly subscription service includes daily workouts, as well as cooking and nutrition advice. His trainer staff includes 14 independent contractors, and Maher claims to have trained 5,000 paying clients through his program -- both the bootcamps and DVDs. 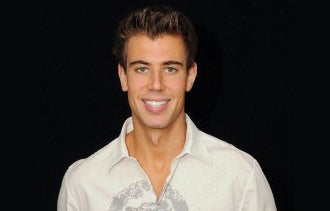 "It's close to a million-dollar business," Maher recently told YoungEntrepreneur.com. But "it really could be a $100 million brand." He adds that the business could soon hit that mark, as Maher plans take it national in two or three years by way of franchises under the Fit Moms for Life brand. Another goal is to reach 1 million moms by the end of 2015, he says.

Seems like a tall order. But Maher is confident. "I've never had to get any funding," says Maher, who keeps his overhead low by using rented spaces and parks.

Shortly after graduating from the University of Wisconsin in 2006 with an exercise-science degree, Maher created his MamaTone fitness class to help mothers get in shape and connect with other health-conscious moms. He offered a free week to start and free childcare.

"Within two to three weeks, I had 12 paying clients," Maher says. He later added the bootcamps, 28 DVDs and the book.

The initial inspiration for the business, says Maher, was his appreciation of his own mother, who worked as a nurse before becoming a stay-at-home mom of four.   As Maher and his siblings grew up in Elk River, Minn., his mother imparted her knowledge of good nutrition while, to some degree, sacrificing her own wellbeing, he says.

That made Maher wonder: What products or services would have helped his mom take time for herself when he was young? Then, he thought, maybe that idea would translate to other moms.

Though Maher largely has his mom to thank for inspiring his business, he also credits mentoring and networking programs for his success.

Not long after graduating, Maher spent $10,000 on a coaching regime with an Internet marketer who packages fitness programs. Within three months, Maher had his own DVD-subscription program through which he quickly began generating five figures a month. "I invest in my education," he says.