By Lambeth Hochwald June 26, 2012
Opinions expressed by Entrepreneur contributors are their own.

Deepti Sharma Kapur has no patience for lines. The 25-year-old New Yorker thinks queuing up at food-trucks is particularly egregious -- especially during inclement weather.

"Everyone wants to save time," says Kapur. That's why delivery has become so popular. But what about the restaurants, food trucks and carts that don't deliver? That's the puzzle Kapur is out to solve.

In 2008, Kapur -- a business and political-science major at Stony Brook University at the time -- was pulling an all-nighter, studying for the admissions test to get into law school. As she hit the books, she gazed out of a nearby window at the Treats Truck, a New York food truck that sells sweets like oatmeal cookies and brownies, parked on the corner outside the library. It was then that she had her aha moment: What if she could order from the truck online -- and skip the line?

That little burst of inspiration gave Kapur the idea for FoodtoEat , an online ordering service for food trucks, carts and restaurants. But rather than mimic well-known brands like GrubHub or Seamless.com, FoodtoEat aims to indulge in something of a social mission by keeping her prices low. Instead of charging 10 to 18 percent of each order like many competitors, FoodtoEat costs truck and cart owners just 10 cents an order, no matter how big an order is. 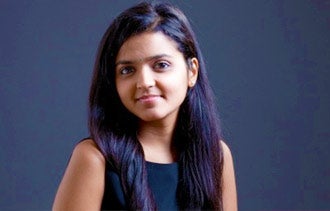 Deepti Sharma Kapur launched FoodtoEat to encourage the growth of food trucks and her online-ordering empire.

Users input their address and zip code on the site to find the closest food truck or restaurant to their location. They use a smartphone to place the order with the food truck or cart owner. The owner then clicks on a link to confirm the order and prints out a receipt on a GPRS printer. For trucks or restaurants that have wifi, orders appear online.

"Our mission is to help food carts, trucks and restaurants survive," she says. "The food-truck business is very seasonal and our system helps them keep their customers around all year round."

But Kapur is also running a business. So regardless of her social mission, creating a sustainable business must also be part of the plan, right? Bingo, says Kapur who has eight employees. "Our intention is not to make money through our vendors but through data collection and advertising."

To do this, the young entrepreneur plans to sell data FoodtoEat collects about users to companies interested in consumer spending as well as to suppliers who want information about the businesses they're selling to. Currently in development as well? The advertising side of the site.

Though Kapur refused to offer revenue figures, she did manage to raise $500,000 in angel funding a year ago. Since then, FoodtoEat has reeled in more than 2,000 registered users and about 500 restaurants, including Auntie Anne's and McDonald's. She also works with 50 food truck vendors, including Midtown-Manhattan favorite the Biryani Cart and Rickshaw Dumpling.

Going forward, Kapur -- who speaks four languages -- is in talks with trucks and cart owners in different cities, including Philadelphia, Los Angeles and San Francisco. And she's working on a new site geared toward reservations called SeekATable.com. "We're piloting this with a few restaurants in New York City that are giving us feedback," she says. "Before we expand, we want to make sure the product is solid."

How is your company using pricing as a differentiator? Leave a comment and let us know.