Rock The Post's Tanya Privé on the Future of Crowdfunding

By Lambeth Hochwald September 12, 2012
Opinions expressed by Entrepreneur contributors are their own.

The young founders of Rock The Post have a saying: If you want something done, give it to an entrepreneur.

While that may sound like something that belongs on a bumper sticker or a refrigerator magnet, it's the driving force behind Rock The Post's business model -- helping entrepreneurs win funding and start real businesses.

"Good entrepreneurs are so passionate about the reason why they do what they do, which fuels their actions and allows them to be among the most persistent and brightest people out there," says Tanya Privé, who at 26 left her job at Fox News to launch the New York-based crowdfunding startup.

The site, which Privé launched in November of last year with co-founder Alejandro Cremades, started out as an open platform for anyone and everyone to freely post projects. But it quickly morphed, says Privé. "We found people are posting ads," she says. "That’s when we decided we needed to get involved and curate the quality of what’s on our site."

Now, a rewards-based funding platform where a "crowd" of users fund their favored projects, and, if a pitch reaches its goal-funding amount -- a.k.a. 'rocking the post' -- then prizes are divvied out and the platform takes a percentage of the funds raised. But unlike well-known competitors like Kickstarter and Indiegogo, Rock The Post also aims to help entrepreneurs and seed-stage startups make connections to resources like developers,  programmers and designers. The site also helps project hosts edit their posts for maximum impact. 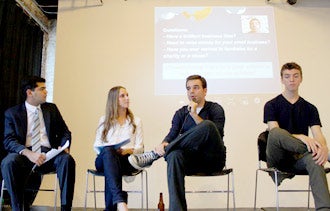 "What we’ve learned is that it’s going to be best if we do one thing well and that’s to help entrepreneurs connect with funders and then help them know the right steps to take once that connection is made. That’s our value-add," says Privé.

So far so good, she says. Since launching, Rock The Post has supported more than 200 projects. And the site -- which Privé, now 27, and Cremades, also 27, launched while working full-time jobs -- has landed roughly $700,000 in angel funding.

Still, headwinds persist. In April, President Barack Obama signed into law the Jumpstart Our Business Startups Act, or JOBS Act, which among other things loosened the restrictions on who can invest in startups. In other words, the law allows businesses to raise money from investors in exchange for equity in a company and it allows non-accredited investors to buy a stake in startups.

That means the rewards-based crowdfunding sites like Rock The Post have a decision to make: Should they continue to operate as is, or switch to an equity model? Though not an easy question to ponder, Privé and Cremades say, for now at least, they'll hold tight. "We haven’t decided to enter the equity space yet," says Privé who notes that the JOBS Act is just one game changer coming down the pike for her industry.

"Social media has forced higher levels of transparency, responsibility and accountability for people on a personal and business basis. This phenomenon has slowly transferred the power from a select few who controlled large territories, to now, the masses who have a voice and say in the matter," she says. "Crowdfunding is building on this phenomenon, where the masses give their vote on whether or not there is interest in a project, as opposed to a couple of investors being the ultimate judges."

Related: Recognizing the Silver Lining And Business Idea Behind a Bad Internship

So would Privé do it all over again? Yes! But her advice to young entrepreneurs is this: "Only pursue a startup if you're deeply passionate about it. Be patient and make sure your daily actions are consistent with your vision for the venture. Passion will get you through the tough times and patience will give you the strength to keep going back to the drawing board until you find the winning formula."

What do you think is in store for crowdfunding? Let us know in the comments section below.