By Brian Patrick Eha October 23, 2013
Opinions expressed by Entrepreneur contributors are their own.

LinkedIn's mobile ecosystem just got bigger and better. At an event in San Francisco today, chief executive Jeff Weiner and other top staffers unveiled LinkedIn Intro, a brand-new app, as well as an updated iPad app and a new version of Pulse, the news app that LinkedIn acquired in April.

Intro is also the result of an acquisition, in this case the startup Rapportive, which had created software that displayed, alongside your email correspondence, the professional information and social media accounts of people who had contacted you. It was a sort of identity verification that also gave you the chance to connect with correspondents elsewhere on the web. LinkedIn purchased the company in February 2012.

Intro integrates Rapportive's features with LinkedIn, so that you can see people's LinkedIn profile information from within your iPhone Mail app when they contact you. You can see their job title, education, mutual connections and more.

Rahul Vohra, co-founder of Rapportive, began his presentation by asking the audience a rhetorical question: What is the most popular activity on mobile devices? "It's not gaming," he said. "It's not browsing the web. It's not even social networking. The No. 1 activity on mobile is email, and the growth of mobile email is staggering." 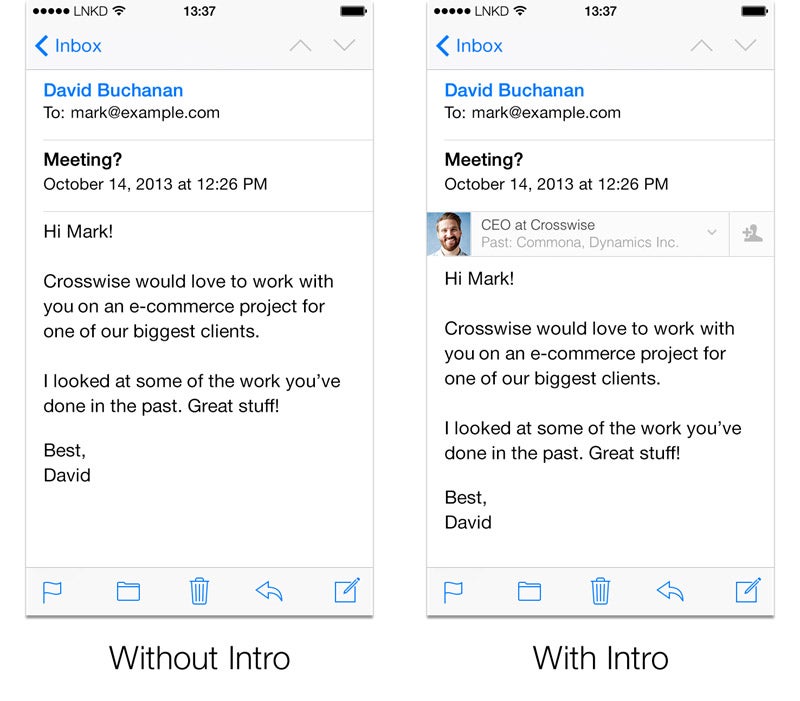 Intro works with the email offerings from Google, Yahoo and AOL. With more than 50 percent of all emails now being read on a mobile device, up from only four percent four years ago, according to Vohra, that will bring a lot of functionality to a lot of people.

LinkedIn also unveiled a new version of its iPad app that features an enhanced feed with more images and video and an updated version of LinkedIn's search engine, which was available only to desktop users before now.

The company also relaunched its Pulse app, integrating influencer blogs and making it so that LinkedIn users will receive recommended news stories when they log in. The reading experience has also been redesigned. "It's much more beautiful and much more delightful, while still being easy to use," Ankit Gupta, Pulse's co-founder, said.

The new versions of the iPad app and the Pulse app advance LinkedIn's overall goal, which is "to build the definitive publishing ecosystem," Steve Johnson, the company's vice president of user experience, said at the event.

LinkedIn debuted the first iPhone app for its network in October 2012. Since then, the pace of new mobile offerings has been rapid. A completely redesigned iPhone app followed in August 2012, and a still later version in April of this year. Also in April, LinkedIn introduced its first iPad app, whose updated version is available today in Apple's App Store.

Related: How to Build a Mobile App of the Future