New reports are circulating that Dropbox wants to be worth $8 billion as part of a new round of funding.

Dropbox will look to raise $250 million more in the next few weeks, according to two people with knowledge of the company’s plans, who asked not to be identified because the discussions are private. The company, these people say, seeks a valuation north of $8 billion, or more than double its last round, which closed in Oct. 2011.

We've heard this story before. In 2011, rumors swirled about a massive round Dropbox was raising. Back then it was rumored to be getting offers at $8 billion valuation and then it was said to be at $5 billion. In the end, its valuation at that time was $4 billion.

Dropbox has raised $312 million to date, Vance reports. It says it has over 200 million users and 4 million businesses.

But it's facing stiff competition. Google and Microsoft both offer file sharing services that are included with Android or Windows devices. Box, too, has done particularly well with enterprise business users.

We first saw news of the big funding round via Bloomberg tech reporter Ari Levy in a tweet: 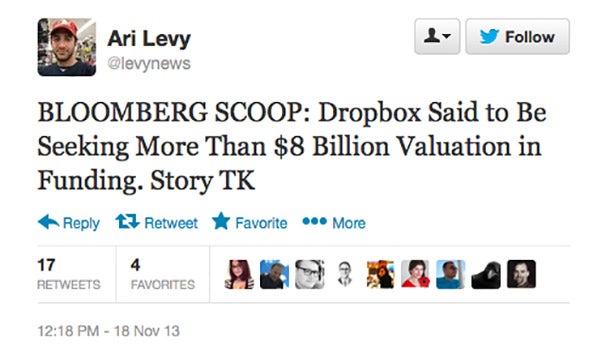