If life had gone according to his original plan, Scott Jordan, founder and CEO of Ketchum, Idaho-based Scottevest, would be a highly successful internet legal executive. Instead, he's an internet apparel executive. The change in direction occurred in 2000, when Jordan, wearing headphones while rushing through an airport, got his cable snagged on a doorknob. "It practically pulled my ear out," he recalls. "I said, wow, there has got to be a way to design clothing that incorporates the wires."

As vice president and general counsel for a startup, Jordan was a frequent flier who carried a lot of gear: a PalmPilot, flip phone, data cable, hydrogen fuel cells for extra battery power, a fairly large 1.3 megapixel camera and, of course, that CD player. "That was my typical load," Jordan says, "and my keys."

He had no background in apparel or design. Nor did he have a desire to form a clothing company. His plan was to license the concept of pocket-packed wired clothing to other firms. But first he would have to reinvent the pocket to create clothing with what he calls a "personal area network" of hidden pouches connected by channels for cords and wiring. Ultimately he secured a patent on his means of incorporating wires into clothing, allowing for the potential to license the technology to third-party manufacturers.

Jordan created Scottevest's first product, the eVest 1.0, with 15 pockets, as proof of the concept. But after leaving his job at the startup, he needed to make some money, so he decided to sell the vest online for $159. (It now sells for $125.)

Soon after launch, the vest got coverage in Parade magazine, spurring a surge in sales. By the end of its first year in business, Scottevest had sales of a couple hundred thousand dollars.

Early on, Jordan knew there was a risk that tech innovation might eventually kill his business--who needs multiple pockets for devices when a single smartphone can do everything? "Convergence hasn't taken place. If anything, quite the opposite," Jordan points out. He adds that in addition to a smartphone, many people carry a mix of tablets, wired headsets, external batteries and other gadgets. 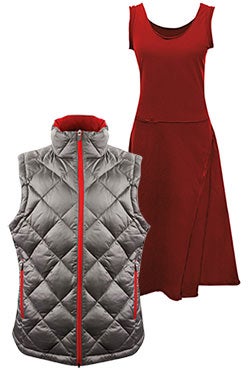 The Phoebe Dress (top) and the 21-pocket women's Carli Vest.

Indeed, Scottevest has recorded steady revenue growth, between 20 and 40 percent year over year, and Jordan expected to finish 2013 with sales of $10 million. The 18-person company produces and sells 50 pocket-loaded products, including boxer shorts, hats, pants, button-down shirts and jackets. (The surprisingly handsome Expedition Jacket features a whopping 37 pockets.) Some 85 percent of sales are through the Scottevest website.

The women's line, which originally bombed--it wasn't attractive, Jordan says--now makes up about 35 percent of total sales, thanks to a late-2010 overhaul by his wife, Laura, who serves as company president.

Sales have no doubt been helped by significant media attention. There have been stunt promotions, such as sending a travel writer on a six-week trip around the world without luggage. And there have been very public spats with Delta Sky Magazine--which rejected an ad touting Scottevest as a way to "avoid extra baggage fees"--and Mark Cuban, with whom Jordan sparred on Twitter after spurning an offer from the Shark Tank investors when he appeared in a 2012 episode of the show. There was also a trademark dispute with ski outfitter Scott USA and a battle with IBM over logo similarities. 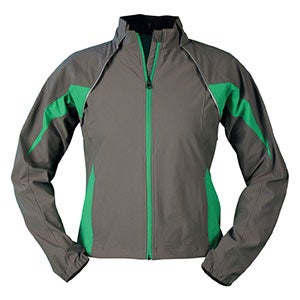 The sleeves of the women's Kelly Jacket attach with magnets

Ever the lawyer, Jordan and his startup have refused to back away from any fight. "Am I a lightning rod for controversy?

Absolutely," he says. "I am not bothered by it. All publicity is good publicity, and when you are a small consumer brand, trying to get the word out and not advertising ... it levels the playing field."

These days Jordan has left controversy behind in favor of pursuing licensing opportunities in earnest. This year, he says, the company plans to announce several collaborations with outside designers. But when pressed for details, Jordan is uncharacteristically silent.

This time, it would seem, he's playing his cards close to his multi-pocketed vest.