When you can get your favorite TV shows just about anywhere and anytime, does that affect how closely you pay attention to what's actually on? A new poll from DVR innovator TiVo shed some light on our "second screen" viewing habits.

TiVo released its 2013 Social Media and Multitasking Survey this week detailing how their users (as well as non-subscribers) prefer to watch TV. While 69 percent of people polled said they tend to surf the internet while the TV is on, 76 percent said that "their primary focus is actually watching what's on TV."  If viewers are on the internet while they are watching television, they are most likely using a smartphone.

The survey also emphasized what TiVo termed "the Game of Thrones factor," using that show's fairly sizable plot twists and turns to illustrate the result that 73 percent say "there are certain shows that are so important to me or so tricky to follow, I make sure not to do other things while I am watching them." Although, it was tough to avoid mention of a certain #RedWedding on Twitter last summer, even if you aren't a fan of the HBO series.

Forty-three percent of social media users agreed with the statement "I only want to discuss TV with people I know, not with Internet strangers," deciding to chat about their shows with their social networks rather than internet forums. While some networks use hashtags to drive conversation, according to the survey, 68 percent of TiVo subscribers "notice them," 63% don’t like seeing them pop up, whereas 3 percent said they did like them. Meanwhile, 7 percent "use social media sites to read what people are saying," and 4 percent "post on social media sites" while watching.

While live tweeters make up a small part of TiVo's survey, it's hard to argue with the ever-increasing impact of second-screen viewing. In the fall, Nielsen and Twitter partnered up to better account for social TV engagement with their Nielsen Twitter TV ratings. Programs like ABC's Scandal, AMC's The Walking Dead and ABCFamily's Pretty Little Liars are among the most tweeted about series on the air, as were TV events like SyFy's TV movie (and meme generator) Sharknado and NBC's live production of The Sound of Music.

TiVo polled 1,660 households from during the fall of 2013. Forty percent were TiVo subscribers, 48 percent were not subscribed and 12 percent were recruited to take the survey from social media sites. All who participated were over 18 and reported watching 7-plus hours of television a week. 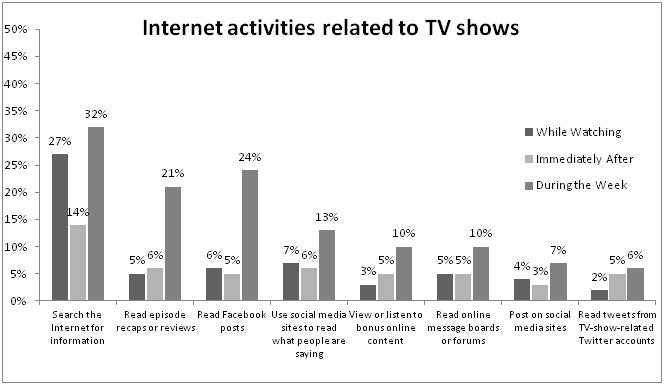