Look for Even More Megamergers in 2014

By Patti Domm February 26, 2014
This story originally appeared on CNBC

With three mergers totaling more than $110 billion in just the past week, 2014 could be the year of the megamerger, as cash-rich companies hunt for growth in a sluggish economy.

Merger experts say they see evidence that the current environment could be the best for deals since the financial crisis began, and there is pent up demand for acquisitions, put off in the last couple of years by disruptions like the European sovereign crisis or budget showdowns in Washington.

The latest deal was Facebook's surprise bid for WhatsApp for $16.4 billion, or $19 billion when including restricted stock. The deal is the fifth-biggest tech deal ever, and pushes tech mergers to a total of $42 billion year-to-date, the heftiest volume since the tech merger mania in the dotcom bubble era of 2000, according to Thomson Reuters.

"All these companies are flush with cash and need to do something with it," said Andrew Burkly, head of institutional portfolio strategy at Oppenheimer Asset Management. "I would definitely say companies and CEOs probably feel a little more comfortable that their stock has a high value at this point."

So far this year, there have been about 37 deals of a billion dollars or more compared with 29 a year ago at this time. "This is really a continuation of what we've seen in terms of deal volume," said Richard Peterson, director of valuations and risk strategies, Global Markets Intelligence at S&P Capital IQ.

"There's a handful more, but you've got some of the biggest deals ever," he said.

The Facebook deal follows closely on Comcast's $69.3 billion deal for Time Warner Cable, announced last week and this week's $25.5 billion bid from Actavis for Forest Laboratories. Comcast is the parent of CNBC.

"Last year, there was over $1 trillion of U.S. M and A. That was the biggest year since 2007 ... and already as we speak, a little bit past the midway point of the first quarter, there's been over a quarter trillion (dollars) in deals," said Peterson.

As long as there are expectations for an improving economy and the stock market hangs in, the activity should continue.

Chris Ventresca, global head of M&A at JPMorgan, said one of the big drivers of the current merger wave is the stock market itself, after its 30 percent climb last year. 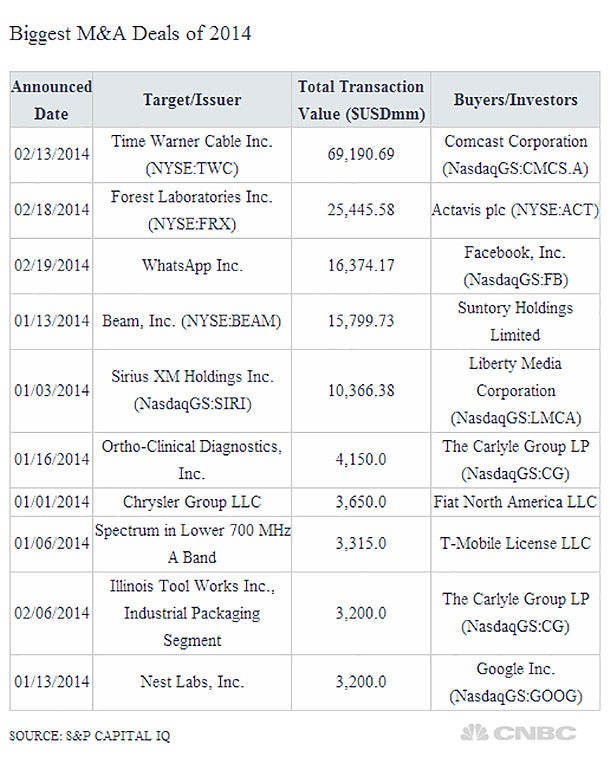 "Beginning in the fall, the pressure for companies to look externally for growth started to build," he said. "They are now turning that feeling and pressure into action, where companies are willing to look and think about longer-term value creation and growing their companies, and ways of doing that. They're looking at their current stock price valuations ... and they're going to need a growth catalyst to drive their stock higher, and they're also more comfortable using their stock to facilitate M and A deals."

Ventresca said the pipeline for future deals is strong, and barring geopolitical events or a very volatile stock market, 2014 could be the best time for M&A since the financial crisis began.

Jim Head, co-head of M&A for the Americas at Morgan Stanley, also sees a strong deal pipeline, and says companies are motivated.

"As we pivot into 2014, I actually think CEOs and boards have a challenge in front of them, which is to repeat last year, and I think that is creating a real desire by CEOs and boards to review what actions they need to be taking for the longer term. I think the pendulum is swinging a little bit from husbanding liquidity and returning capital to what I would characterize as bolder moves."

The deals are also healthier, and the stocks of acquiring companies are rising, opposite the more traditional trend of investors punishing companies for diluting their stocks in mergers. Ventresca said energy, technology and health care should continue to be active sectors for merger activity, and a pickup in deals by cyclical sectors, like industrials is likely. He also expects to see more overseas buyers.

Stronger buyers in Europe and Asia are looking at North America for possible deals. "I think there is an interest there and there is activity but it has not yet turned into lots and lots of deal announcements," Ventresca said.

Head said one area where there are likely to be some serious buyers is Japan, and they are willing to look abroad. An example of that was Suntory, buying Beam in a $15.8 billion deal.

"Their cost of capital is so low, and their desire to deploy it is so high that once they make a decision to own an asset, they are formidable buyers," he said. 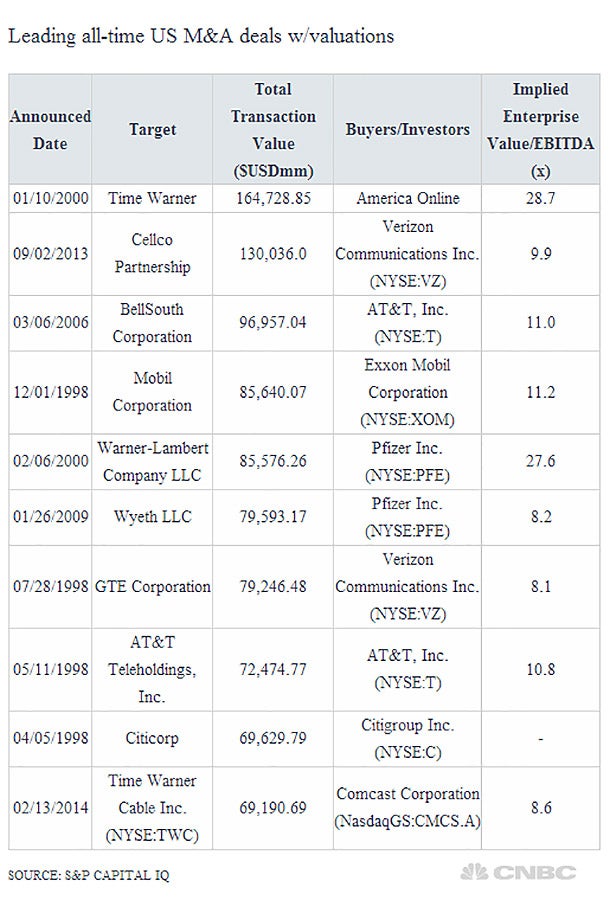 Armed with strong stock prices, CEOs are betting they can gain share, or expand into new areas with marriage partners, and the deals could stir more activity as rivals see a changed landscape. In the case of Facebook, it's seeking a leg up in mobile with its purchase of the WhatsApp instant messaging platform.

Big mergers don't necessarily give new life to the stock market. "It would definitely suggest later cycle activity," said Burkly. But experts agree that the activity is a sign that companies see a more normal economic and financial environment.

"Most investors this year would have liked to see the return of capex, which was the big waited for, hoped for nirvana, which is still missing in terms of this bull market ... I think that's what people would rather see. We've gone from them using cash for dividends, buybacks and M and A," said Burkly.

Burkly said it is a sign of confidence, however. "We're getting back to normal a bit, but it's also a sign of not organic growth, but you're buying growth," he said. Tech would be one area where he expects to see more activity, since technology companies have had good earnings and are holding piles of cash.

"Bankers would love to declare we're off to the races. It's still spotty. There are still some big deals getting done," said George Sard, CEO of communications advisory firm Sard Verbinnen. "My read is CEO confidence is improving, but it's still fragile. The environment is looking better, but I wouldn't call it boom season in M and A."