How 'Raising the Roof' Heightened This Restaurant's Brand

The following is the 17th in the series "Live Your Brand" in which branding expert Melanie Spring takes us along on her three-week road trip across the country to meet innovative entrepreneurs whose experiences offer lessons learned to businesses big and small.

Starting a business is not easy but buying an established business can sometimes be harder -- especially when it’s a restaurant in an oversaturated market like Washington, DC.

When Tony Lucca bought into the partnership of 1905, he knew it was going to be an uphill battle.

Before Lucca joined the 1905 group, he knew he wanted to focus on the underserved and undervalued areas of the city. He was looking to be ahead of the gentrification game. The right space in the right neighborhood was going to be the key, so he took networked people to lunch and met with restaurant owners to get a better read on the business. After doing his research, it seemed like 1905 fit the bill.

Related: How a Rebrand Helped Spice Up This Cal-Mex Chain

The U Street area of Washington, DC is known for being the nucleus of jazz with Duke Ellington’s childhood home being from this area. As it has changed over the years, it’s kept the jazz influence and become known for the plethora of locally-owned businesses and restaurants with a wide diversity of ethnicity. Families have been moving into this area over the last few years and 1905’s New Orleans jazz influence mixed with its cozy atmosphere invites the whole neighborhood.

The many lessons Lucca has learned make the reward of success so much sweeter. Here’s how he ran uphill and what you can learn from the achievements of 1905.

Know your neighborhood. With a second floor restaurant above a wine shop almost a block from bustling U Street, 1905 has had an uphill battle from the get go. Although they have a high-return business, getting people in the door was tough. So, Lucca made a concerted effort to make 1905 accessible to all of its neighbors.

Knowing the U Street neighborhood vibe, Lucca played up the Southern flare of the New Orleans-style restaurant. Jazz plays in the background complementing the many music halls in the area while also being a cozy local spot friendly enough for families and friends. The restaurant lacks pretention, has oodles of romance and an inviting atmosphere. You can stop by in your jeans and sneakers for a last minute dinner out or make it a night out with your girlfriends.

Related: CVS' Lesson: Let Your Brand Be Your Guide 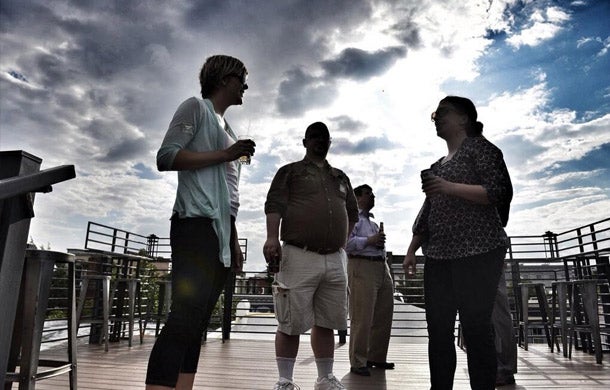 Create space for new customers. Although 1905’s customers are loyal and come back time and again, he had to find a way to get new people in the door. The U Street Corridor only had a few outdoor spaces and his rooftop had a view of the Washington Monument.  Almost bankrupting himself and the business numerous times, Lucca’s goal paid off when he opened his rooftop deck. His costs ended up being 10 times his original budget, but the rooftop paid for itself in just five months of being open. The main area of the restaurant is all handcrafted, dark, cozy, and romantic. The rooftop took the same handcrafted idea and created a wide-open, modern space attracting a more diverse crowd of people. The demographic 1905 originally served didn't change, it just expanded.

Finding a new way to bring customers in the door ended up being a huge risk but Lucca knew he had to reinvest in his business to keep it growing. Putting his restaurant on the map by creating all new space allowed more eyes to be on his restaurant and allow more people to get a feel for the restaurant vibe while walking through on their way to the roof.

Build loyalty and find great people. Staffing is one of the toughest parts of any business, especially in the restaurant industry.

"Learning to let go is one of the hardest things about owning a business,” Lucca explains. He interviews potential hires on personality more than any other attribute. He wants to be sure his employees fit the 1905 brand by offering Southern hospitality with DC charm. His favorites are the ones who have a lot going on in their lives because he knows they can focus on the task at hand when it's time.

Lucca knows his staff takes direction from the top down and leads by example. “As an entrepreneur, there is no ego in the game. Show your team you'll do everything,” says Lucca. Working hard every day, he shows how much 1905 means to him. The loyalty he’s built has caused 1905 be one of the few restaurants without employee theft. Everyone works hard, stays focused and provides the best they can to every customer and each other.

Related: The Difference Between a Business and a Brand

How a Tax Return Helped This Entrepreneur Land a Successful Brand

Building a Brand of Love Amidst a Harsh Reality

5 Steps to Build Your Personal Brand

5 Reputation Missteps to Avoid During the Holidays