How This Theater Fills Its Empty Seats Every Night

This story appears in the April 2014 issue of . Subscribe »

Every seat that goes unsold at the three-venue Center Theatre Group in Los Angeles is lost revenue.

And every night Jim Royce, director of marketing, communications and sales for the nonprofit company, faces a delicate balancing act between pricing those extra seats to move and protecting their value--while not angering core subscribers who paid full price in advance.

Royce has spent years trying to figure out the best way to move his unsold inventory, dealing with unscrupulous ticket brokers and fly-by-night second-party ticketing sites. A Groupon experiment "was a mess," he recalls. And a flatlined customer base wasn't helping matters. "We have 300,000 households in our database who may see one, maybe two shows a year, but we have enough seats for an annual audience of more than 1 million," he says. "I have to find those additional people somewhere." 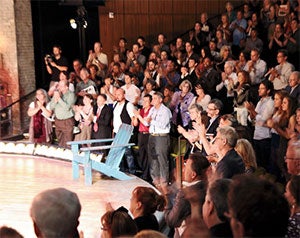 The fix
Royce took a chance on Goldstar, a primary ticket seller that operates with a membership model. The Pasadena, Calif.-based ticketing service works directly with venues and productions around the U.S. to unload tickets, usually at half the face value, charging customers a service fee and taking a 5 percent commission of the ticket sale. "In L.A., they have about 800,000 members," Royce says.

Royce now allocates his unsold inventory to Goldstar--roughly 10 percent of the house; usually the seats at the back--for half price and can process those sales up to noon on the day of a performance, holding the tickets at will call. Adding to the appeal, Royce can track sales in real time, a feature that has allowed him to tweak and hone his allocation and pricing structure on the fly, sometimes releasing seats from or allocating more to Goldstar a mere 24 hours before a performance.

The result
Royce credits Goldstar with selling an extra $1 million worth of tickets last year. "We see almost zero complaints from Goldstar ticket buyers," he says.

"Their service charges are in line with ours, so the customer doesn't feel gouged, and they do a great job linking their system to ours, so the ticket buyer enjoys a seamless experience."

It also doesn't hurt that Goldstar sends a check to the Center Theatre Group every two weeks like clockwork. "I can track how much they're going to send me and when it'll be sent," he says, "and they follow through every time."

A second opinion
"Goldstar is listening to what their members want, whether that's being able to buy tickets with their smartphones at the last minute or working with a venue on variable pricing," says Damian Bazadona, founder and president of Situation Interactive in New York City, a digital marketing company for entertainment and lifestyle brands.

Goldstar says one-third of its sales are made via mobile devices. Bazadona points out that this is a major plus for venues--especially nonprofits like Center Theatre Group--that wish to dip their toes into mobile payments before investing in their own technology.

From the Experts: Learn How to Boost Sales in 2021 With This 7-Course Bundle

5 Ways to Get Free Trial Users to Become Paying Subscribers